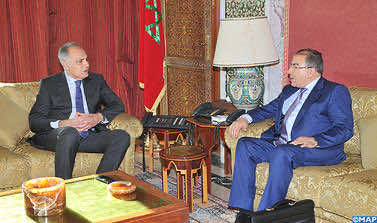 “I express my deep gratefulness to HM the King and to the government and people of the Kingdom of Morocco for their continued support to the democratic transition process in Tunisia”, Hamdi told journalists following his meeting with his Moroccan counterpart Salaheddine Mezouar.

Tunisian FM also hailed the strong relations of cooperation and bonds of brotherhood between the two countries.

Tunisian chief diplomat reiterated his country’s determination to take the strategic relations with Morocco to the next level, noting that his visit is aimed at boosting bilateral ties and expanding cooperation and coordination on issues of common interest, particularly the Libyan crisis.

In this regard, Hamdi expressed Tunisia and Morocco’s readiness to help the Libyans brothers to sit on the negotiating table in order to peacefully resolve all outstanding issues through dialogue and national reconciliation.