Rabat - King Mohammed VI, who was accompanied by Crown Prince Moulay El Hassan and Prince Moulay Rachid, chaired, this Thursday afternoon at the Mechouar square of the Royal Palace in Rabat, the wishes and gift-offering ceremony (Hdyia), marking the beginning of the wedding of HRH Prince Moulay Rachid with Lalla Oum Keltoum. 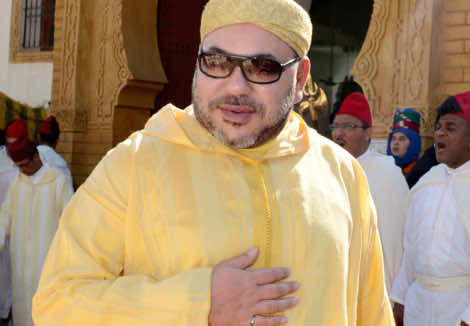 Rabat – King Mohammed VI, who was accompanied by Crown Prince Moulay El Hassan and Prince Moulay Rachid, chaired, this Thursday afternoon at the Mechouar square of the Royal Palace in Rabat, the wishes and gift-offering ceremony (Hdyia), marking the beginning of the wedding of HRH Prince Moulay Rachid with Lalla Oum Keltoum.

The ceremony started with a colorful procession which paraded in front of the Royal tribune at the Mechouar square, headed by El Mechouar’s Caid.

The procession included also the wali of the Rabat-Salé-Zemmour-Zaer, the governors of the region, elected members and local notables who came to extend to the sovereign and HRH Prince Moulay Rachid the best wishes of the inhabitants of the capital and its region.

They were followed by students of Quranic schools, dressed in white, symbol of soul’s purity and attachment to the holy book, bearing the message of peace and tolerance.

In conformity with the tradition of the Alawite dynasty, several couples from all Moroccan regions will have the honor of getting wed at the same day as HRH Prince Moulay Rachid.

The Hdyia, made of gifts that men carry in Taifurs (traditional plates with cone-shaped lids) with censers, henna (flowering plant), gum Arabic and sandalwood, is the most important event of the Moroccan traditional wedding.

The parade of representatives of Morocco’s sixteen regions was also among the event’s highlights as it mirrors the perfect symbiosis between the Moroccan people and the Glorious Alawite Throne. Every region, represented by a delegation composed of men and women clad in traditional clothing and bearing gifts, took part in the procession while singing and dancing.

At the end of the ceremony, HM the King, accompanied by Crown Prince Moulay El Hassan and Prince Moulay Rachid, left the royal stand and headed to the Mechouar esplanade to greet the cheering crowds. The audience included noteworthy national and foreign guests.