Rabat - King Mohammed VI offered, on Friday at the Rabat Royal Palace, a dinner in honor of guests attending the wedding of Prince Moulay Rachid. 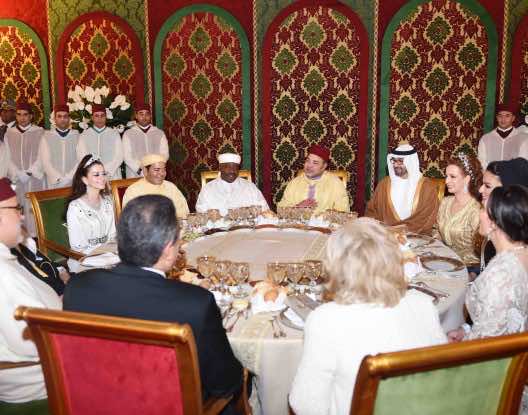 Rabat – King Mohammed VI offered, on Friday at the Rabat Royal Palace, a dinner in honor of guests attending the wedding of Prince Moulay Rachid.

The event was attended by Moroccan and foreign figures who came to share with the King, Prince Moulay Rachid and the Royal Family, this joyful happening to which was associated all the Moroccan people.

Earlier on Friday, King Mohammed VI chaired at the Rabat Royal Palace, the “Berza” ceremony during which HRH Prince Moulay Rachid and his spouse are officially shown in couple before their families and distinguished guests, according to the most authentic ritual of the Moroccan tradition.

During the Berza ceremony (when the bride and the groom are installed to be seen and admired by the entire audience), the festive atmosphere prevailed and was marked by ululations, prayers for the happy couple and burning incense.

The ceremony crowns two days of festivities, notably the Hdiya procession (gift-offering ceremony) on Thursday, which was marked by the participation of delegations from Morocco’s 16 regions displaying the Moroccan culture’s diversity and richness.

On Thursday evening, the guests attended, in the Royal Palace, the traditional henna ceremony, which is a basic ritual to celebrate the Moroccan wedding.