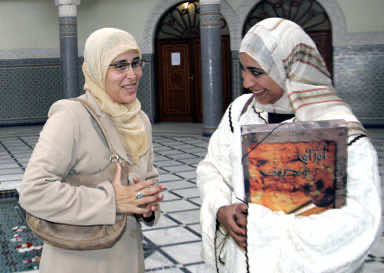 In Morocco, 60% of women have never been to school, but the Morchidat programme was introduced in 2006 as part of a raft of reforms to strengthen the position of women in Moroccan society and temper the rise of extremism, manifest in the terrorist attacks that struck Casablanca in 2003.

The Morchidat have a mission: to highlight Islamic teachings of compassion, tolerance and equality. Their work takes them into mosques, schools, homes, orphanages, prisons and out in the countryside. They support the education of women and girls; campaign against early marriage; and encourage young people to build a better Morocco, rather than dreaming of life in the West.

Award-winning director Rosa Rogers says, “The lives of women in the Arab world are often closed and off limits to those outside. As I learned about the work of the Morchidat and the lives of the women they work with, I discovered a different Islam from the images that dominate Western mainstream media. On every step of the way with this film, I have had my ideas and preconceptions consistently challenged, reframed and expanded.”