Monaco (AFP) - The Qatari capital of Doha was named host of the 2019 Athletics World Championships on Tuesday, just days after the Gulf state's football officials were cleared of corruption by FIFA in their successful bid for the 2022 World Cup. 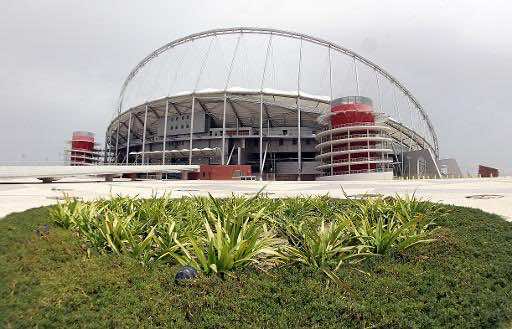 Monaco (AFP) – The Qatari capital of Doha was named host of the 2019 Athletics World Championships on Tuesday, just days after the Gulf state’s football officials were cleared of corruption by FIFA in their successful bid for the 2022 World Cup.

The International Association of Athletics Federations (IAAF) announced Doha had beaten off Barcelona and Eugene, Oregon, for the event after missing out to London for the 2017 edition.

“I am sure that in Doha we will have a wonderful edition of the World Championships,” said IAAF president Lamine Diack, saying the three bids were “the best presentations we have ever had”.

Sheikh Saoud Bin Abdulrahman Al Thani, the leader of the Doha bid which saw off that of Eugene 15-12 in the second round of voting by the IAAF after Barcelona’s elimination, added: “It’s a privilege and honour to have the trust of the IAAF.

“I am very delighted that these championships are going to be for the first time in the region. I’m confident that with the help of the IAAF we will organise one of the best world championships.”

Doha has proposed holding the event in the unfavourable period from September 29-October 6, with marathons to be held in the evening, in a bid to avoid the searingly hot summer month of August, when the championships are usually held.

The 2015 world championships take place in Beijing from August 22-30, while the London 2017 event is also scheduled for August.

The issue of temperature has also been a factor in the 2022 World Cup, with a push to hold it in the winter months, much to the disgruntlement of the European leagues.

Doha will also be a controversial choice for track and field because most athletics events are wrapped up in early September, with the final Diamond League meet usually held in Brussels on the first weekend of the month, and just a sprinkling of meets following that as athletes head into the off-season before an all-important Olympic year.

It held the 2010 World Indoor Athletics Championships, and for several seasons the opening meet of the Diamond League, in May.

It will also host the World Swimming Championships in December and in January the men’s World Handball Championships.

But there are sure to be doubts over Doha’s ability to fill a stadium for two track and field sessions a day.

The athletics programme in the 2006 Asian Games was very poorly attended, and even spectator support at the three-hour-long Diamond League meet, bringing together some of the sport’s biggest names but now staged in a compact inner-city stadium, is far from fantastic.

Outspoken Welsh 400m hurdlers Dai Greene, the 2011 world champion in sultry Daegu, expressed immediate concern over the weather, having trained there ahead of the 2010 Commonwealth Games.

“Was in Doha as prep camp for Delhi ’10. At training I overheated and hyper ventilated then was carried off the track. Spent next week in bed,” Greene tweeted.

Qatar has come under the media microscope since winning the right to host the 2022 FIFA World Cup, with doubts thrown up over corruption, its human rights record and treatment of its massive foreign workforce.

But the gas-rich state was cleared by FIFA of corruption on Thursday, world football’s governing body ruling out a re-vote for the tournament despite widespread allegations of wrongdoing.

However, the accusations seem sure to linger as within hours of FIFA’s ethics committee publishing a summary of US-based lawyer Michael Garcia’s report, Garcia himself said he would appeal against the findings as they contained “numerous materially incomplete and erroneous representations of the facts and conclusions” detailed in his investigation.

FIFA has defended its refusal to publish Garcia’s report on the grounds it would undermine a promise to all those those who gave evidence on condition of anonymity.