Marrakech - The official opening session of the 5th Global Entrepreneurship Summit that is taking place in Marrakech was marked by the celebration of the birthday of US Vice President Joseph Biden who turns 72 on Thursday. 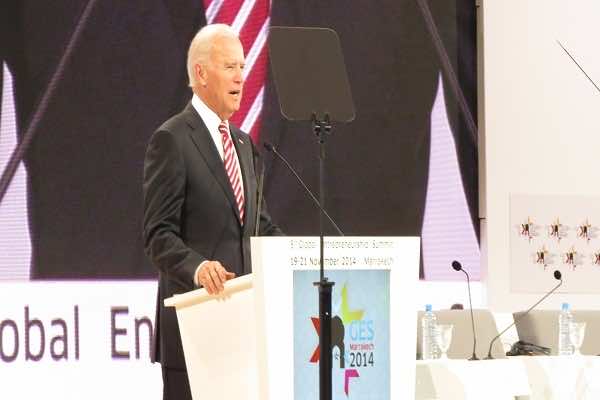 Marrakech – The official opening session of the 5th Global Entrepreneurship Summit that is taking place in Marrakech was marked by the celebration of the birthday of US Vice President Joseph Biden who turns 72 on Thursday.

Joseph Biden, who was born in November 20, 1942 in Pennsylvania, jokingly said in the beginning of his speech that it is a nice gesture of his majesty King Mohammed VI “who assembled this crowd for my birthday.”

The crowd, consisted of high dignitaries, ministers, economic operators, civil society representatives in addition to young entrepreneurs from all over the world, started singing a mass ‘happy birthday to you’ song to the Vice President of the United States of America.

“I appreciate it,” he added.

The US Vice President expressed his happiness to be in Marrakech and in Morocco, saying that “what most people do not realize is that Morocco holds a special place in the hearts of Americans.”

“Morocco is the first nation in the world to recognize the United States of America 237 years ago in December 17, 1777, and I come here to say thank you,” he added.

Joseph Biden also said that he came to Morocco, a Muslim nation at the crossroads of Africa, the Arab world and Europe, to talk about ‘what it takes to succeed in the 21st century, and what is required to create thriving, innovative societies worthy of the talents of their young people.’