Marrakesh - Morocco is positioning itself as a major economic player in the Middle East and Africa, said Andrew Rabens, special adviser for global youth issues at the US Department of State. 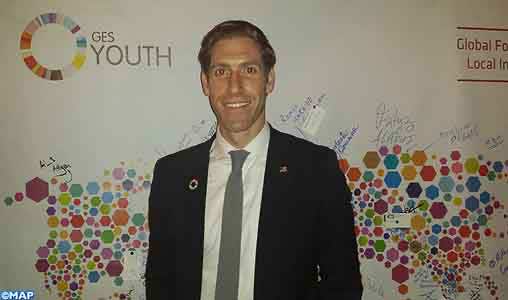 Marrakesh – Morocco is positioning itself as a major economic player in the Middle East and Africa, said Andrew Rabens, special adviser for global youth issues at the US Department of State.

“In seeking to establish economic and trade relations with both North African countries and Sub-Saharan countries, Morocco is positioning itself as a major economic player in the Middle East but also in Africa”, Rabens told MAP on the sidelines of the 5th annual Global Entrepreneurship Summit (GES 2014/Nov. 19-21, Marrakesh).

Referring to the “GES Youth meeting”, an initiative that brought together some 70 young entrepreneurs from around the world, the US official noted that the aim was to share good practices and experiences in the area of entrepreneurship.

In this context, Rabens highlighted the entrepreneurial mindset of the Moroccan youth, underlining the positive impact of this momentum on job creation and economic take-off in Morocco.

Held under the Patronage of King Mohammed VI, the 5th edition of GES is initiated under the theme “Harnessing the Power of Technology for Innovation and Entrepreneurship.”