Marrakesh - US vice president Joe Biden reiterated on Thursday in Marrakech his country's determination to strengthen partnership relations with Morocco, particularly in promoting entrepreneurship and innovation. 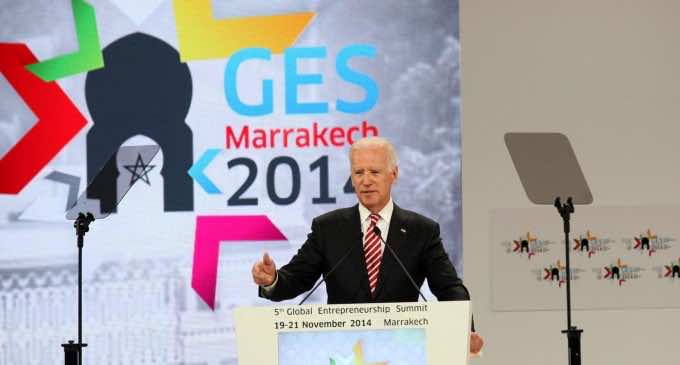 Marrakesh – US vice president Joe Biden reiterated on Thursday in Marrakech his country’s determination to strengthen partnership relations with Morocco, particularly in promoting entrepreneurship and innovation.

The United States stands ready to strengthen partnership with Morocco, Biden said in his remarks at the official opening of the 5th annual Global Entrepreneurship Summit (2014 Marrakesh GES), recalling that Morocco was the first country to recognize the United States of America back in 1777.

US Vice-President announced the US government decision to invest nearly $ 50 million under the Millennium Challenge programme to support Morocco’s strategy in vocational training.

The Millennium Challenge Corporation (MCC) will invest nearly $ 50 million to support Morocco’s strategy in vocational training as part of public-private partnerships, Biden said, noting that this new project aims to develop the skills of young people and help them meet the job market needs.

To date, some $ 700 million have been invested in projects in Morocco through the MCC, the US vice president recalled, noting that the Moroccan government and MCC will begin next January exploring new public-private partnerships in the area of training.

Biden also announced the creation in Morocco of an academy for entrepreneurs training, a partnership between the US government and the Volvo company to train annually 150 entrepreneurs from Morocco, Cote d’Ivoire and Senegal.

Training will focus mainly on technology and industry in order to appropriately prepare future entrepreneurs to meet the new challenges of the job market.

The US vice president also revealed that his government, in partnership with Spain, will provide Morocco with a $ 7 million credit guarantee to fund a new storage facility project in the Tanger-Med port in order to boost Morocco’s agricultural exports to key markets.

Regarding the first operations of the new Global Entrepreneurship Network which will be launched in Morocco, the US official said Washington will dedicate $ 1 billion to support the private sector in several countries over the next three years and expand economic opportunities, particularly for women and young people.

Held under the Patronage of HM King Mohammed VI, the 5th GES is held under the theme “Harnessing the Power of Technology for Innovation and Entrepreneurship”.