New York (United Nations) - A Moroccan parliamentary delegation condemned Friday at the headquarters of the United Nations in New York Israeli practices in Al Quds, calling on the international community to take action and support the Palestinian people's rights, including their right to an independent State with Al-Quds al-Sharif as its capital. 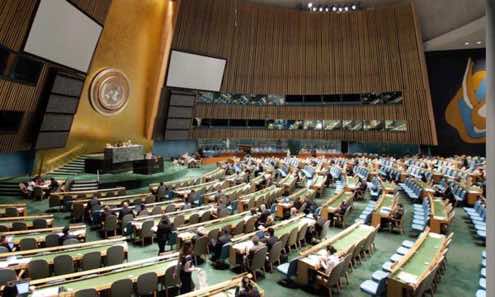 New York (United Nations) – A Moroccan parliamentary delegation condemned Friday at the headquarters of the United Nations in New York Israeli practices in Al Quds, calling on the international community to take action and support the Palestinian people’s rights, including their right to an independent State with Al-Quds al-Sharif as its capital.

“Israel has trampled all UN resolutions and international conventions”, the head of the Moroccan delegation Abed Chkail said. He recalled the “barbaric Israeli attack on Gaza” and the “systematic and recurrent attacks” of the Hebrew state on the holy Al Aqsa Mosque and on the faithful as well as the growing settlement activities in the Holy City.

The Moroccan delegation, composed of MPs from majority and opposition alike, took the floor before the UN Committee on the Exercise of the Inalienable Rights of the Palestinian People on the occasion of an international meeting under the theme: “The Role of Parliamentarians in Ensuring Respect for International Law

“We condemn and reject these Israeli practices that go against international law, international humanitarian law and human rights”, he said, urging the international community to shoulder its responsibilities in supporting the Palestinian people’s rights to an independent state on the basis of the 1967 borders with Al Quds as its capital in accordance with international law.

Morocco, which chairs the Al Quds Committee in the person of King Mohammed VI, follows with deep concern Israeli escalation in Al Quds and its attempts to undermine the legal status of Al Quds set by international resolutions as part and parcel of the occupied Palestinian territories in 1967, the Moroccan MP concluded.