Rabat - My first encounter with critiques of capitalism was via the works of Alain Badiou and Slavoj Zizek, suggested to me by a friend whom I often pester with questions on social media. After reading some of the works of Badiou and Zizek, I widened my scope to thinkers including Jacques Ranciere, Michel Gauchet and Pierre Bourdieu. I then started reading Marx’s Kapital, and other works by the same author. All this exploration of the nature of capitalism and its potential alternative, confirmed or rather reinforced my conviction that the international capitalist system of nation-states and multinational corporations is a sick system. 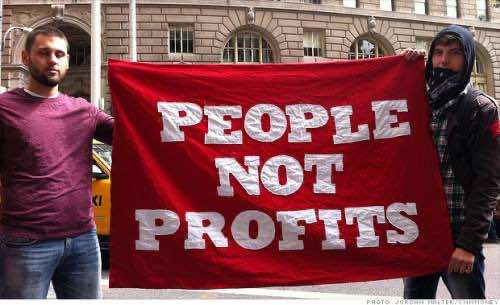 Rabat – My first encounter with critiques of capitalism was via the works of Alain Badiou and Slavoj Zizek, suggested to me by a friend whom I often pester with questions on social media. After reading some of the works of Badiou and Zizek, I widened my scope to thinkers including Jacques Ranciere, Michel Gauchet and Pierre Bourdieu. I then started reading Marx’s Kapital, and other works by the same author. All this exploration of the nature of capitalism and its potential alternative, confirmed or rather reinforced my conviction that the international capitalist system of nation-states and multinational corporations is a sick system.

In other words, political, economic and corporate power in action inevitably leads us to war, conflict, political disorder, and socio-economic poverty for the majority. I started noticing class-struggle when witnessing via mainstream media that the 2008 financial and economic crisis was a consequence of financial crimes led by a financial mafia: gangsters in Wall Street exploding the financial and economic sectors via the notorious subprime mortgages and the credit crunch subjecting the working classes to a very high extent as the first victims of the crisis and the middle classes to a lesser extent.It was a financial coup as Michael Moore coined it in his film “Capitalism, a Love Story”, which made the oligarchy in general and Wall street in particular richer than ever.

Since then, I have always perceived capitalism as both the most dynamic socio-economic order in history, as well as the greatest source of misery for mankind. To be both fascinated by capitalism’s exceptional power to create wealth and build new powerful structures, and at the same time being repulsed by its unequal nature creating wealth for ruling elites and the middle classes to a certain extent, and on the other hand misery for the working classes was puzzling. This shows our fascination with this Leviathan or powerful structure, which enriches the ruling elites and corrupts our sensitivity or most importantly, our solidarity towards the have-nots, the alienated working classes who cannot afford to buy merchandise and who are ignored in our consumerist societies. I concur, it is undeniable that purchasing power became in our current time a way to prove that we are worth something, that we exist. “I buy therefore I exist”. Let us all sign cause petitions on Avaaz.com and we will feel better reading this article on our iPhones while having coffee at Starbucks.”

However, in addition to being an economic and political system in which a country’s trade and industry are controlled by private owners for profit, rather than by the state; capitalism is certainly a system based on unnecessary accumulation of wealth, greed, alienation, monstrous inequalities and global disparities which are destroying the planet. In fact our ecosystem is in critical condition as Leonardo Dicaprio and president Obama eloquently argued recently at the United Nations. Additionally, billions of people struggle to provide for food and fresh water in our capitalist globalized world.

Having a capitalistic way of life myself, this did not prevent me from thinking about the “Big Question”, i.e whether there can be an alternative to capitalism. Most of the time when the issue is brought up with friends and acquaintances, the first reaction to the question of whether there can be an alternative, most people put forward cliché remarks such as “capitalism is the system best suited for our appetitive and selfish human nature”, or “look at 20th century history and the obvious failures of communism, and that most revolutions led to totalitarian states such as the case of the USSR.”

My main reply to such remarks is that of course it is important and necessary to look at the human political and societal contradictions which led to the failure of the first great attempt to apply communism mainly when Stalinism and Maoism emerged. There is no dispute regarding the fact that 20th century communism is dismissible, when considering  its genocidal and totalitarian outcomes. From the Great Purges in the Soviet Union to the Great Leap Forward in Mao’s China, it is self-evident.

However it is as important, if not more important to start by reading Marx’s Das Kapital, and The Communist Manifesto in order to have a minimum understanding of what Alain Badiou calls “Generic Communism.” This will enable anyone interested in knowing, that genuine communism should be distinguished from, and has nothing to do with Stalin or Mao ZeDong’s outcomes and State Communism as historical totalitarianism. Though the term is an oxymoron, as communism implies the abolition of the State and instead reinforced the state apparatus.

In fact, this is a minimum in order to engage in any decent discussion on the issue and evaluate what Marx means by communism, and most importantly if it has any potential future. In my opinion, it should have a future because most of the world’s population either lives under conditions of alienation as a result of which economic and social realities  they are in, where  workers are disconnected from what they produce and why they produce. Marx believed that alienation is a systematic result of capitalism and poverty. Thus why it should be abolished.

Finally, with regards to the crisis in the Middle East, I would argue that I used to blame Zionism for the crisis in the Middle-East, then I understood that Zionism is a mere component of capitalism as a pathological order. This can be shown by taking examples of Israel’s economic military superiority partly financed by the US government, the US being a superpower functioning under conditions of capital. In other words, capitalism was the virus, and Zionism the infection or the symptom. This can easily be supported by the idea that the creation of the State of Israel is mere continuation of Western Imperialism. Imperialism as Lenin put it, is “the highest stage of capitalism”.

The reasoning which lies in Lenin’s assertion consists of accepting the idea that the function of financial capital in generating profits from imperial colonialism, is the final stage of capitalist development to ensure greater profits. It is just a matter of opening a history book in order to see the validity of Lenin’s reasoning. European Imperial Colonialism of nations, American economic and cultural imperialism and Zionism are all gradual expressions of capitalism.

The answer is simply and wholly “capitalism”. If mere capitalist profit, exploitation of the working classes and destruction of the environment for the sake of being at the service of those with purchasing power is on the table, we are led to defeat. Alienation of the working classes and suffering, global disparities and chaos will be the norm until doomsday. Let us think seriously of a radical alternative: “generic communism,” as a form of emancipatory socio-economic order for every human being. But let us rethink the   abolition of capital, and its replacement with communism with the same rigor a scientist experiments a new molecule for a given disease. This is of utmost importance in order to avoid the failures of previous attempts to change the world.

Philosopher and cultural critic Slavoj Zizek says that Marx’s quote “Philosophers have merely interpreted the world, the point is to change it” needs to be changed by “Let us interpret and rethink the world rigorously before daring to change it” because attempts were perhaps too hasty and ill-intentioned by charismatic leaders throughout the 20th century.

A passage from Karl Marx which I agree with, presents an elegant illustration of what genuine communism looks like theoretically:

“Communism deprives no man of the power to appropriate the products of society: all that it does is to deprive him of the power to subjugate the labor of others by means of such appropriation. It has been objected, that upon the abolition of private property all work will cease, and universal laziness will overtake us. According to his, bourgeois society ought long ago to have gone to the dogs through sheer idleness; for those of its members who work, acquire nothing, and those who acquire anything, do not work.” (Marx and Engels, The Communist Manifesto.)