Fez- Morocco‘s infrastructure is specifically designed to serve its citizens only in mild weather conditions. This became clear during a rainstorm that engulfed several different regions in the country. 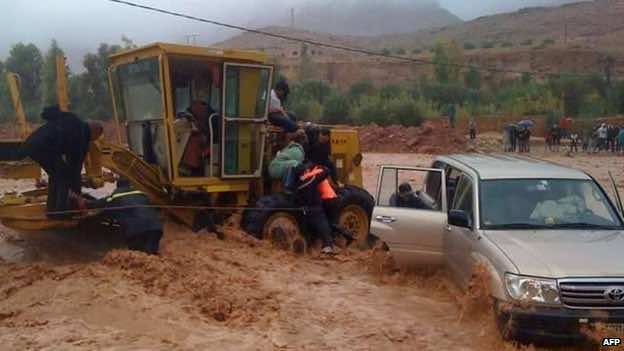 Fez- Morocco‘s infrastructure is specifically designed to serve its citizens only in mild weather conditions. This became clear during a rainstorm that engulfed several different regions in the country.

Take, for example, the situation in southern Morocco. It only took three days of heavy rain to reveal the fragile state of the region’s infrastructure, to which great sums of state money have been allocated.

A new bridge has fallen and a dozen roads have been blocked. Thank God that we are rarely faced with natural disasters, otherwise we would suffer greatly.

The recent floods worsen the condition of the citizens of rural Morocco. Even now, many tribes are still isolated and lack basic life necessities. Their survival depends on supplies delivered to them by helicopters.

We do not reject God’s destiny, but rather blame state policies that have left these places fragile and vulnerable.

The rain found weak resistance in Morocco’s infrastructure. A new bridge partially collapsed in Taliouine, a town about two hundred kilometers from Agadir. The huge bridge, which was inaugurated only four months ago, failed its first test, killing twenty-four people. What is worse is that Morocco has about three hundred bridges that could potentially fall. In response to this catastrophe, Minister of Transportation and Equipment Aziz Rabbah said in an interview with Kiffach that the Ministry and the government are not able to fix all these problems in a short period of time.

National TV reports showed living people being swept away by the heavy rain, an agonizing and poignant sight for Moroccans. Something could have been done to help the victims if we had had adequate equipment and a solid infrastructure.

In other videos, some citizens had the audacity to expose themselves to tremendous danger by driving through roads that the rain had turned into rivers. They escaped death when it seemed unavoidable. The images evoke the urgent need to re-integrate isolated areas in rural Morocco so they might benefit from the privileges that urban areas monopolize.

As a citizen of Fez, I can’t imagine what would happen to my city if rain struck the old medina. The rain in the southeast reached up to 200 milliliters per second, destroying nearly 250 houses, and that number is still rising. Under such circumstances, the old medina of Fez would be buried.

I am not scared of death as much as I am in pain about my beloved country. While many nations that have just yesterday gained independence enjoy great infrastructures, we are still lagging behind.

The crux of our problem is that we wait until disasters happen, and then we start throwing each other under the bus, even though the people in charge are experienced enough to foresee potential dangers.

However, it is useless to “cry over spilt milk.” Let’s not worry about past mistakes and exchange allegations. Let’s hit the ground running. Starting from ground zero, let’s work diligently to promote our society and make sacrifices for the welfare of our children. Let’s do it.