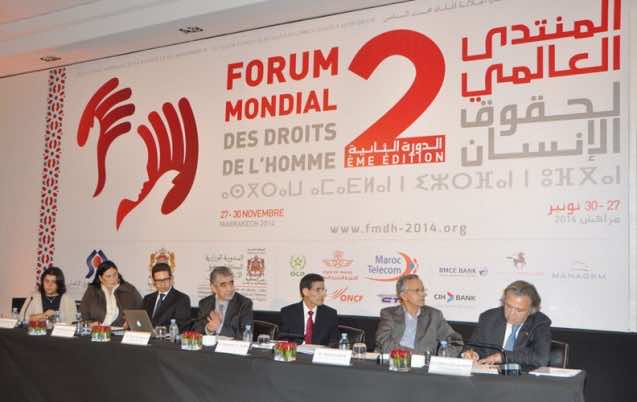 San Francisco- The Kingdom of Morocco will host the second annual World Human Rights Forum (WHRF) in Marrakesh from November 27 to 30. Although a few Moroccan news media outlets are covering the conference, the international media is eerily absent. Instead, many international media outlets have decided to cover the boycott of two prominent Moroccan human rights groups, which are staying away from the global human rights forum in protest, accusing the government of interfering with their work.

The Moroccan Association of Human Rights and the Moroccan League for Human Rights have both decided not to participate in the WHRF. They claim that the government is responsible for imprisoning members of the February 20 movement, including rapper el Haqed. They are also protesting the ban imposed on the parliament from debating the Palace and military budgets. They also allege that the authorities in Morocco have blocked their meetings and denied them venues for planned events.

Authorities in Morocco have denied that they are targeting any human rights groups. They point out that NGOs have organized more than 4,000 events in Morocco this year,.50,000 demonstrations have taken place, and the choice to move forward with democratization in Morocco is irreversible.

However, Minister of Interior Mohamed Hassad has accused some domestic associations and entities of using the pretext of defending human rights to make harsh accusations of the security services “without any basis … of perpetrating acts like abductions, torture, and arbitrary detention.” He said, “This behavior is part of a deliberate campaign … where they are resorting to the preparation and submission of false reports to drive some of the international organizations to take hostile positions towards Morocco’s interests, including its territorial sovereignty.”

The authorities do not deny that in some “isolated cases”, people’s rights were denied. They have also admitted that even torture has taken place. But according to the government, the responsibility in these cases belongs only to the person who committed the acts, and they reiterated that it is a criminal act that should be punished.

These two advocacy groups are removing themselves from the world stage. This is a big mistake on their part. This is an opportunity that will not repeat itself. They will only have themselves to blame for missing out on this chance to tell the world exactly what they are about and how they want to see Morocco in the future. Perhaps they calculated that excusing themselves from the event will give them more exposure, which is probably true in the short term, but how is that going to help their mission in the long term?