Beijing - Morocco wants to build "strong, lasting and mutually beneficial" partnership with China, based on the centuries-old ties of friendship and solidarity, Foreign Minister, Salaheddine Mezouar, said on Friday in Beijing. 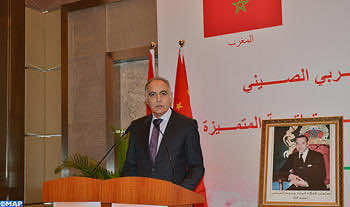 Beijing – Morocco wants to build “strong, lasting and mutually beneficial” partnership with China, based on the centuries-old ties of friendship and solidarity, Foreign Minister, Salaheddine Mezouar, said on Friday in Beijing.

Speaking at the opening of a Moroccan-Chinese business forum, the Moroccan official voiced satisfaction with the level of bilateral economic cooperation, highlighting that China has become Morocco’s third supplier. In this regard, the minister stressed that Morocco plans to diversify its bilateral trade with China as part of an endeavor to open up on new markets.

With regards to finance and the growing network of Moroccan banks in Africa, the Foreign Minister pointed out to the prospects for fruitful triangular partnerships between Moroccan banks and their Chinese counterparts willing to enter the African markets

On the same occasion, Mezouar reiterated Morocco’s full support to China’s strategic interests, its territorial integrity and unity as well as the one-China principle.

Morocco is China’s second trading partner in Africa, while China is Morocco’s 4th trading partner. In 2013, trade between the two countries rose by 4.8% compared to 2012 to stand at 3.69 billion dollars.