Beijing- Morocco and China signed, on Friday in Beijing, over thirty cooperation agreements and memorandums of understanding to boost bilateral trade and cooperation. 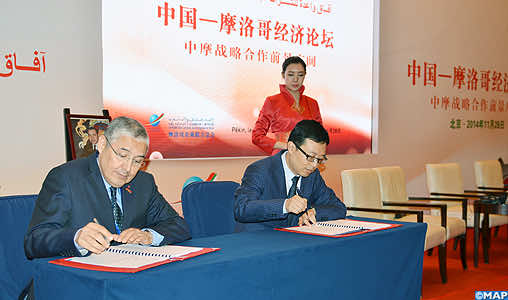 Beijing- Morocco and China signed, on Friday in Beijing, over thirty cooperation agreements and memorandums of understanding to boost bilateral trade and cooperation.

Signed during the Moroccan-Chinese business forum, the agreements provide for cooperation in the sectors of energy and mining, tourism, finance and banking.

In this respect, the Moroccan company for energy investments and Ming Yang New Energy Investment Holding Group signed an agreement to reinforce Moroccan-Chinese partnership in renewable energies. This agreement aims at boosting the production of equipment designed for Moroccan and international solar projects.

Another agreement was signed between Morocco’s hydrocarbons office (ONHYM) and the Nerin Engineering Co-LTD to pave the way for a long-term bilateral partnership in the fields of mining and hydrocarbons.

In the sector of tourism, Morocco’s tourism office (ONMT) signed two memorandums of understanding and the Moroccan Company for Tourism Engineering (SMIT) signed a partnership agreement with Chinese partners to increase the number of Chinese tourist arrivals in Morocco and promote Chinese investments in the field.

As for finance and banking Moroccan banks signed several agreements providing for reinforcing financial investments notably in the fields of infrastructure and industry in Morocco and Africa in line with Morocco’s ambition to become a financial hub and an African investment platform. In this regards, nine agreements were signed by Attijariwafa Bank, four by BMCE and four by BCP.

Over 550 Moroccan and Chinese businessmen took part in the Forum themed “promising prospects for an excellent strategic partnership.”

Morocco is China’s second trading partner in Africa, while China is Morocco’s 4th trading partner. In 2013, trade between the two countries rose by 4.8% compared to 2012 to stand at 3.69 billion dollars.