Rabat - Amid the heavy rainfall in Marrakech-Tensift-Al Haouz, an old bridge built by the French colonial authorities near Marrakesh is on the verge of collapse due to the furious floods. 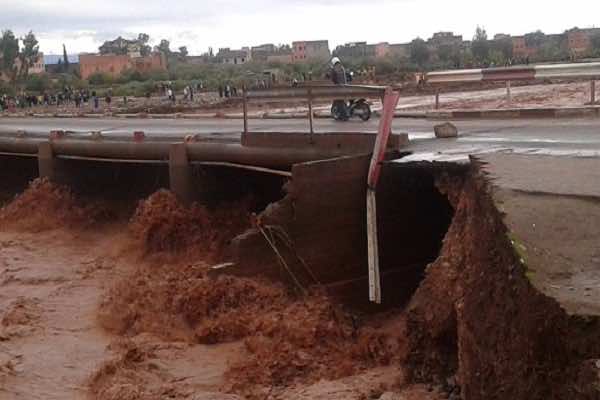 Rabat – Amid the heavy rainfall in Marrakech-Tensift-Al Haouz, an old bridge built by the French colonial authorities near Marrakesh is on the verge of collapse due to the furious floods.

There is concern that the old bridge of Ait Ourir may collapse into the Zat River at any moment. The bridge’s pillars have been partially damaged by the flash floods.

This bridge remains the only transportation link that carries road and rail traffic across the Zat River. Since it was closed on Saturday morning out of fears of collapse, it caused serious traffic problems and stranded the residents of Ait Ourir.

Although the bridge has been in poor condition for a long time, it has never closed for repairs.

Local residents gathered near the bridge on Saturday morning to witness the moment of its collapse, while taking pictures and posting them on Facebook.

Pictures went viral on social media, stirring controversy. Some Moroccan social media users commented on the pictures, saying that at least the French-built bridge has resisted the floods for many years, unlike the Moroccan-built bridges which fail in their first test, referring to the bridge of Taiouine that collapsed only 4 months after it was inaugurated.