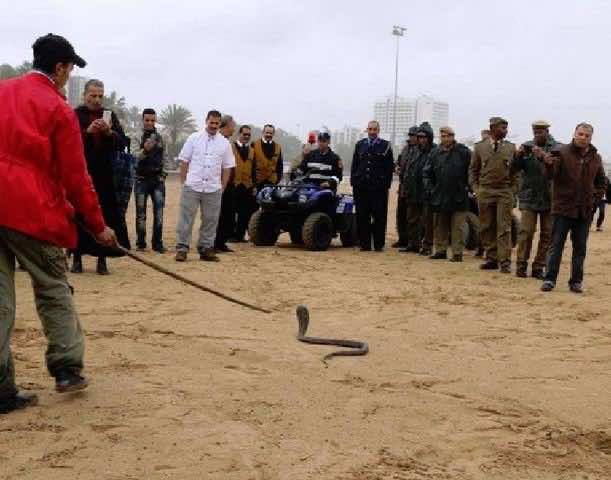 The cobra’s photos were posted on social media networks earlier on Saturday. The snake was spotted by locals at the Agadir beach around 4:00pm, and has since gone viral on social media.

Cobras usually avoid water. This is the first known instance of such a deadly snake appearing on the beach in Agadir. So how did this cobra reach the Agadir Bay Beach?

Multiple reports suggest that floods carried the snake and deposited it on the shore of Agadir Bay.

This is not the first cobra to be seen on an African beach this year. Last month, a two-meter cap cobra was spotted near the sea on Hout Bay Beach in South Africa.

Following the odd incident, snake and reptile education expert Shaun Macleod was asked how dangerous it could have been for people to come into contact with the cobra. The snake expert said it’s not very dangerous.

‘“The only time it would be dangerous is if you physically tamper with it, 98% of people who are bitten by snakes are bitten because of self-infliction. In most times, the snakes won’t attack you but will move away from you,” he explained.