Taliouine, Mroccoo - The unprecedented floods that are hitting Morocco over the past three days are wreaking havoc in a number of regions in the south of the country leaving many small villages cut off from the world. 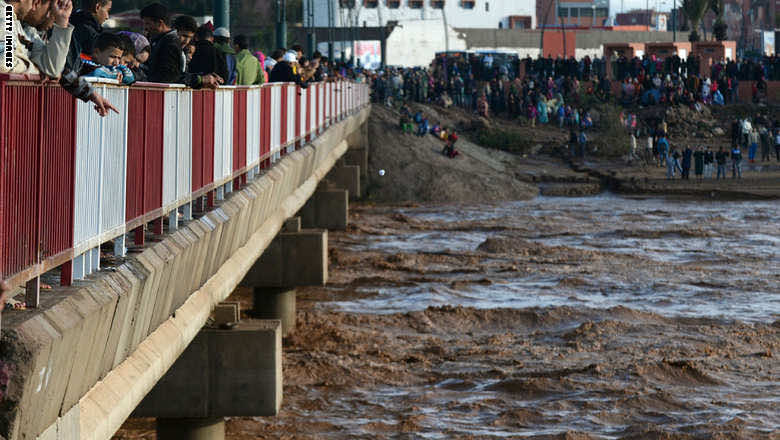 By
Larbi Arbaoui
-
Larbi is a freelance writer and assistant editor at Morocco World News.
Nov 30, 2014
Spread the love

Taliouine, Mroccoo – The unprecedented floods that are hitting Morocco over the past three days are wreaking havoc in a number of regions in the south of the country leaving many small villages cut off from the world.

The example of Talouine, a small town near Taroudant is reflective of the situation of chaos and distress prevailing in most areas affected by the floods.

The whole town is covered with water. There is no cell service or Internet, but there are Inwi landline phones, but it’s overloaded and hardly works. All the roads are unusable. Flooded rivers have covered some bridges with water. Buses are lined up, but all scheduled trips were cancelled.

Here in Taliouine, people can’t get money from their banks because the ATMs aren’t working. Milk is not available, because the Copaq Cooperative that provides the area with dairy products hasn’t made a delivery, even though the road was open for few hours in the morning.

Because of the floods, all the roads linking Taliouine with its neighboring villages have also been closed since yesterday morning. There is no way for the residents to obtain their daily needs. Some places like Askawn are reportedly covered with snow. There are no means to get in touch with the rest of the world. The bridge of Taliouine is still broken, and it is risky to pass over it. Rain has been falling continuously since yesterday at 1:00am.

People are having a hard time after the power and drinking water stopped. There is much material damage, especially the roads and pipes. This damage has caused prolonged stoppages of water and power in the Inzegan and Ait Melloul provinces in Agadir.

Interior Minister Mohammed Hassad was there under royal order. The king gave orders to fix the roads immediately.