Rabat - With a strategic location, solid infrastructure and sound business climate, Morocco stands as a "crossroads" for US investments in Africa, Deputy Under Secretary for International Trade, Kenneth Hyatt, said on Thursday in Rabat. 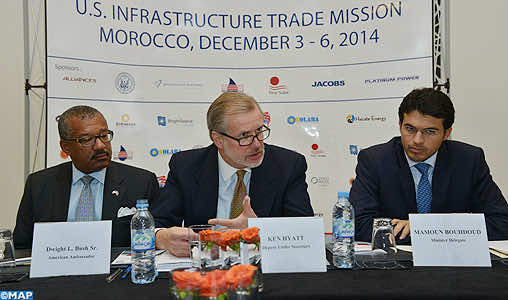 Rabat – With a strategic location, solid infrastructure and sound business climate, Morocco stands as a “crossroads” for US investments in Africa, Deputy Under Secretary for International Trade, Kenneth Hyatt, said on Thursday in Rabat.

Speaking at a press conference, Kenneth, who is leading a US business delegation to Morocco, said that Morocco, “a longstanding ally of the US”, enjoys political and macroeconomic stability that well positions it to be a gate for US investments in Africa.

Hyatt added that the progress achieved by the Kingdom in the fields of infrastructure and renewable energies entitle it to be an “African hub”, noting that the US companies taking part in the visit see “enormous opportunities” for investments in Morocco and “clarity” in the solar energy plan that aims at increasing the share of renewable energies in electricity production to 42% in 2020.

On the Free Trade Agreement (FTA), Hyatt expressed satisfaction regarding the level of bilateral trade which more than tripled since the FTA entered into force in 2006.

Speaking on the same occasion, Minister Delegate to the Minister of Industry, trade, Investments, Digital Economy in charge of Small Enterprises and the Integration of the Informal Sector, Mamoun Bouhdoud, said the US is Morocco’s third trading partner with 4.3 billion dollars of trade in 2013, its third supplier with 3.4 billion dollars and its 4th client with 900 million dollars.

In this respect, Bouhdoud invited US companies to grab the numerous opportunities offered by the FTA whose full potential “remains yet to be tapped into”.

The Moroccan official highlighted the close ties linking Morocco to Africa, adding that Morocco can offer a platform for US enterprises that are willing to invest in the continent and establish mutually beneficial partnership.

Bouhdoud also surveyed the investment prospects available as a result of the Industrial Acceleration Plan that was adopted by the government to put Morocco on the path of emerging economies.

During the visit, the delegation will hold talks with public and private sector officials in the fields of trade, industry, transport, energy and water.