Rabat - During a celebration supporting the Palestinian resistance held in Rabat on Sunday by the Moroccan Association for the Support of the Palestinian Struggle, the Algerian Ambassador to Morocco left the room in protest of a song celebrating the Green March. 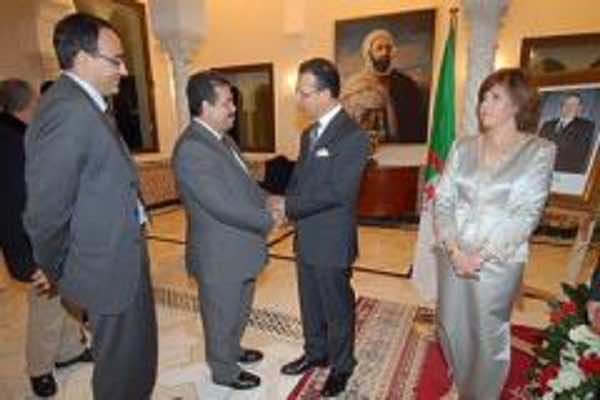 Rabat – During a celebration supporting the Palestinian resistance held in Rabat on Sunday by the Moroccan Association for the Support of the Palestinian Struggle, the Algerian Ambassador to Morocco left the room in protest of a song celebrating the Green March.

The song, known as “Saout Hassan Yunadi” (The Voice of Hassan Calls), sung by Mohamd Alghawi, is a famous song that represents patriotism and Moroccan territorial integrity.  It was sung by Moroccans during the Green March that was organized under the leadership of the late King Hassan II, in 1975.

Ambassador Ahmed Bnimana left the room as Mohamd Alghawi sang about the the Green March, as well as other lyrics of the song such as “May you Moroccan Lands be Happy, You are free,” manifesting his and his country’s attitude towards the Moroccan Sahara.

The Decision of the Ambassador was immediately endorsed by the Algerian Ministry of Exterior Affairs, claiming that the decision was the right choice as Algeria has a different view regarding the Western Sahara.

In a statement to Hespress, Mr. Mohammed Benjelloun Andalusi, Chairman of the Moroccan Association for the Support of the Palestinian Struggle, said that the Ambassador was welcome, but that he chose to leave the room only after the artist started singing the song about the Green March. “He was free to leave,” he added.