Rabat - The 2014 Clubs World Cup, scheduled to take place in Morocco on December 10-20, will be a great show of friendly competition bringing together best clubs in all continents, FIFA President Joseph Sepp Blatter. 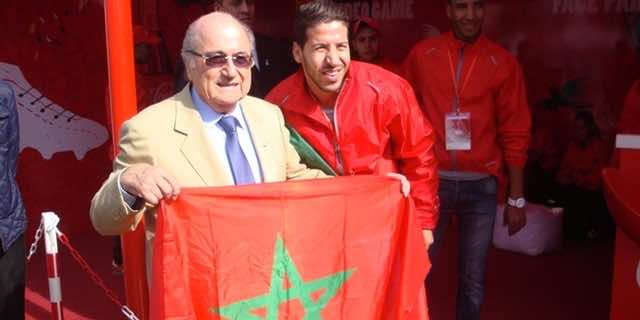 Rabat – The 2014 Clubs World Cup, scheduled to take place in Morocco on December 10-20, will be a great show of friendly competition bringing together best clubs in all continents, FIFA President Joseph Sepp Blatter.

In an interview with MAP, Blatter said he is “fully convinced” that the 2014 Clubs World Cup promises great games between some of the best Clubs from all continents in an atmosphere marked by friendly competition.

In view of the quality of participating clubs, the Cup promises a great show to the delight of the Moroccan football fans whom Blatter invited to fill up the stadiums of Marrakech and Rabat. It will be a moment of “intense emotion,” he said.

The Cup brings together best performing Clubs from all continents who had to go through tough qualification processes, said Blatter, adding that the 2014 edition knew an increase in the number of clubs that take part in the event for the first time.

Recalling the Cup’s previous edition, which took place in Agadir and Marrakech in 2013, Blatter commended Morocco’s good organisations. “The FiFA is very satisfied with the 2013 Clubs World Cup,” he said.

The 2014 edition of the tournament brings together the champion clubs from each of the six continental federations. The qualified teams are Auckland City, Cruz Azul, ES Sétif, Moghreb Athlétic Tétouan, Real Madrid, San Lorenzo and Western Sydney Wanderers.