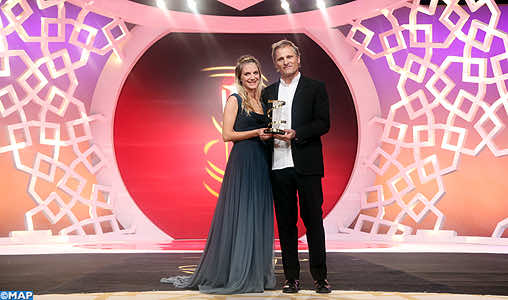 “Acting gets a new meaning with an outstanding actor like Viggo Mortensen,” said French actress, director and singer Melanie Laurent, who presented the award to the talented American actor.

Mortensen is “multi-talented artist” in cinema, poetry, music, photography and painting, she added.

Taking the floor, Mortensen expressed his deep gratitude to HM King Mohammed VI and the organizers of the film festival. “I’m very touched” by this homage and the warm welcome reserved to him at the convention center, as well as in Jemaa El Fna, where was screened his latest film “Far from Men”.

“When I’m in Marrakech, I feel like home,” said the American actor, who recalled that “Far from Men” was mainly shot in the Atlas regions.

Held under the High Patronage of King Mohammed VI, the 14th International Film Festival of Marrakech will run till December 13th.