Rabat - Controversial Islamist Rapper and YouTube celebrity Sheikh Sar has apologized Moroccans for his recent video in which he filmed women’s behinds on the street. 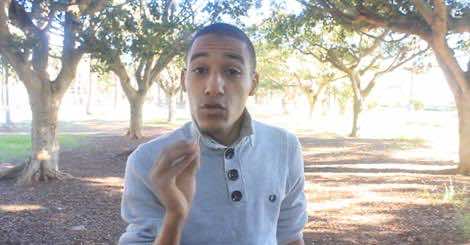 By
Aziz Allilou
-
Aziz Allilou is a student at the Higher Institute of Media and Communications (ISIC) and Morocco World News correspondent in Rabat.
Dec 9, 2014
Spread the love

Rabat – Controversial Islamist Rapper and YouTube celebrity Sheikh Sar has apologized Moroccans for his recent video in which he filmed women’s behinds on the street.

On Tuesday, Sheikh Sar posted a new video on his YouTube channel saying that he made a mistake when he filmed women behinds in his recent video entitled “a man harassed 100 times in an hour.”

Sheikh Sar released the controversial video in order to mock a girl from Casablanca who released a video earlier in November showing her being harassed on the street 300 times. His video sparked controversy in Morocco, and many asked him for apology.

Responding to these calls, Sheikh Sar apologized for the scenes that showed the women. He insisted  that he apologizes for these scenes, rather than the whole video.

He goes on to add that he was just trying to prove that women harass men as well, but he chose the wrong way to prove it.

In the new video, Sheikh Sar said that he was going to post his apology video earlier, but “I decided to  postpone it when some women’s associations threatened to sue me in order to show them that I am not  afraid of them.”

Sheikh Sar goes so far as to confess that he is still young and has little knowledge.

“The majority think that I am a sheikh with the real meaning of the word, while I am not. Sheikh Sar is just a nickname, and my real name is Ilyass Lakhrissi. I am still young and I have little knowledge,” Sar concluded.