Marrakech - The 14th International Marrakech Film Festival on Tuesday paid tribute to the masters of the Levant in the history of cinema in Japan, this year's country of honor. 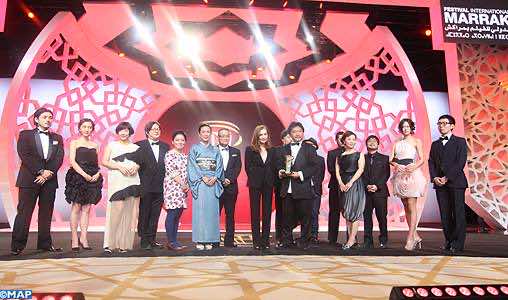 Marrakech – The 14th International Marrakech Film Festival on Tuesday paid tribute to the masters of the Levant in the history of cinema in Japan, this year’s country of honor.

After Scandinavian cinema, the Festival celebrated this year Japanese cinema, which is part of the largest and richest film industries in the world, at a party marked by the presence of a strong delegation of Japanese actors, directors and producers.

Chaired by filmmaker Kore-Eda Hirokazu, honored last year at the Marrakech Festival, the delegation was warmly welcomed on the stage of the prestigious Congress Palace, where they received a trophy from the jury president Isabelle Huppert.

“Japan is not a country of cinema, it is cinema,” the French actress said to introduce the members of the delegation.

She highlighted the strength of this cinematography which has developed its industry very early (the first Major, Nikkatsu, was founded in 1912), for having famous authors (Kenji Mizoguchi, Akira Kurosawa , Yasujiro Ozu) that evolved from the 1920s to the 1960s in the studio system (Toho, Shochiku, Daiei), and having developed a Japanese genre cinema.

On behalf of the delegation, Hirokazu Kore-Eda expressed his thanks to King Mohammed VI and Prince Moulay Rachid, president of the Foundation of the International Marrakech Film Festival, for this tribute that offers an opportunity for Japanese artists and film professionals to meet the Marrakech Film Festival audience and highlight the masters of the Levant in the history of cinema in Japan: from Ozu Yasujiro to Kore-Eda Hirokazu, passing by Kenji Mizoguchi, Naruse Mikio, Akira Kurosawa, Nagisa Oshima, Shohei Imamura, Takeshi Kitano, Hayao Miyazaki, Shinji Aoyama, Naomi Kawaze, Kyoshi Kurosawa, Mamoru Oshii, Takashi Miike, and Masaki Kobayashi, etc.

Festival management has planned throughout this edition (December 5-13) the screening of 26 films representing different generations of Japanese filmmakers, in addition to the long-feature film “Chigasaki Story” by Takuya Misawa, screened after the homage ceremony.