Marrakech- Thousands of Moroccans attended the quarter-final match between the Algerian team Wifaq Stif and New Zealand’s Auckland City at Club World Cup 2014 in Rabat on Saturday. During the match, the crowd sang Moroccan national songs from the stands. 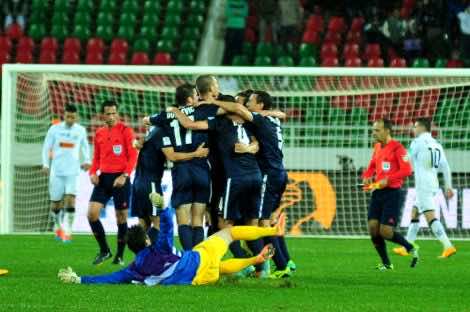 Marrakech- Thousands of Moroccans attended the quarter-final match between the Algerian team Wifaq Stif and New Zealand’s Auckland City at Club World Cup 2014 in Rabat on Saturday. During the match, the crowd sang Moroccan national songs from the stands.

Moroccan spectators sang famous Moroccan national songs, including “Niadae Alhassan” and “A’yun Einiya,” as well as the Moroccan national anthem during the match between Algeria’s and New Zealand’s representatives.

The songs sung by the Moroccan fans in the Prince Moulay Abdellah sports complex in Rabat symbolize patriotism and Moroccan territorial integrity.

The song Nidae Alhassan, known as “Saout Hassan Yunadi” (The Voice of Hassan Calls) defends Morocco’s territorial integrity and its sovereignty over the so-called Western Sahara and has lately spurred controversial reactions from the Algerian people, media, and government. A few weeks ago, the Algerian Ambassador to Morocco left a meeting in Rabat supporting the Palestinian issue in protest to the song.

Moroccan fans selected the songs in an apparent message to the enemies of Moroccan territorial unity. Many Algerian fans were attending the match, along with the Algerian media, which covers the games of Wifaq Stif.

Not only did the Moroccan fans chant the patriotic songs, but, in a move never seen before, they also cheered for Auckland City.