Casablanca- Heavy rains continue to wreak disaster and destruction throughout Morocco, causing three houses to collapse on Sunday evening in the Arsat Ben Slama neighborhood in Casablanca. The incident has reportedly resulted in several deaths and serious injuries. 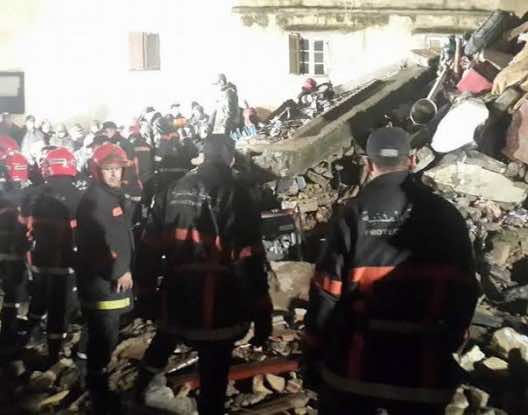 Casablanca- Heavy rains continue to wreak disaster and destruction throughout Morocco, causing three houses to collapse on Sunday evening in the Arsat Ben Slama neighborhood in Casablanca. The incident has reportedly resulted in several deaths and serious injuries.

After a number of previous collapses, including the tragedy in the Bourgone neighborhood of Casablanca in which three apartments collapsed killing more than 20 victims last June, the collapses of the three houses in Arsat Ben Slama, near the Mosque of Hassan II, caused the loss of several lives and serious injuries.

The number of dead and injured has not yet been confirmed, as people are still trapped under the wreckage.

Local authorities in several regions in the city of Casablanca have already commenced demolition of unstable buildings that were already under the risk of collapse. However, local residents opposed the action simply because they have nowhere else to go.

The heavy rain in many parts of the country this year has caused substantial losses in terms of infrastructure, houses, and hundreds of dead people, mainly in the south of Morocco, where people affected by the floods are still receiving humanitarian aid.

Not only has the rain spurred Minister of Transport and Equipment, Abdelaziz Rebbah, to urgently search for solutions for the damaged infrastructures and houses caused by the recent floods that hit several parts of the country, Minister of Youth and Sports, Mohamed Ouzzine, has also opened an investigation into the poor construction of the Prince Moulay Abdellah Stadium that came to light yesterday when it could not withstand the heavy rain it fell in Rabat.