Rabat - The Ministry of Sports has reportedly suspended two high-ranking officials from their duties following the disastrous state of Prince Moulay Abdellah stadium. 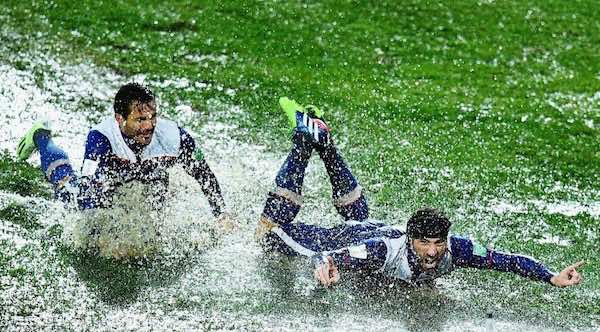 Rabat – The Ministry of Sports has reportedly suspended two high-ranking officials from their duties following the disastrous state of Prince Moulay Abdellah stadium.

The Ministry has reportedly stripped Karim Akkaoui and Mostapha Azeroual, respectively the ministry’s secretary general and director of Sports, from their signing authority in order to “ensure the smooth running of the investigation” it has launched to find out who will be held accountable.

The Minister of Sports and Youth, Mohamed Ouzzine, announced that his Ministry will form an investigative committee that will enquire into all the stages of the Complexe Sportif Prince Moulay Abdellah’s pitch installation with natural turf.

The investigative committee is composed of representatives of the sports departments, the Ministries of Interior, Finance and Equipment.

Mohamed Ouzzine went on to add that this investigation aims to find out who will be held responsible for the poor condition of the pitch of Rabat’s stadium on Saturday.

According to sources cited by Le360 news website, representatives of Valtech, the company in charge of the installation of the turf, presented documents showing that they had attracted the attention of the Ministry of Sports to the fact that the turf commissioned for the Complex Sportif Prince Moulay Abdellah was not suitable.

The company, which was awarded four contracts worth 27 million Dirhams, went on to add that the turf was also different from the one installed in the Grand Stadium of Marrakech, Adrar Stadium in the city of Agadir and the Moulay El Hassan stadium in Rabat.

However, the Ministry of Sports insisted to install a turf similar to that of Real Madrid’s Santiago Bernabeu despite the warnings of Valtech voiced through official letters.

The same source added that following Saturday’s scandal Valtech have been pressured by the two Ministry officials to issue a press release to assume responsibility for the turf’s poor condition.

Due to the poor condition of Complexe Sportif Prince Moulay Abdellah in Rabat, FIFA announced that the Club World Cup Semifinal between Cruz Azul and Real Madrid, scheduled to take place in Rabat, has been moved to the Grand Stadium in Marrakech.