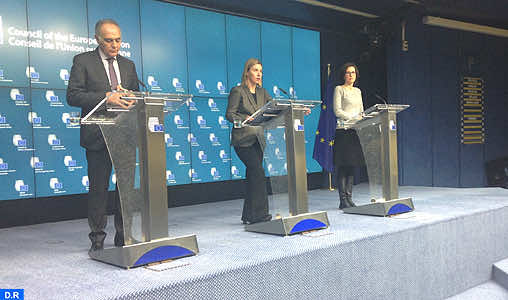 “We are very satisfied with relations between Morocco and the EU which is reflective of the maturity of our partnership,” Mezouar said at a press conference at the end of the 12th session of the Morocco-EU Association Council.

“Morocco continues to implement large-scale reforms in all field,” Mezouar said, noting that special attention will be given to human development and social and economic rights in line with the provisions of the new constitution.

The 12th session of the Association Council was an opportunity for Morocco to reiterate its commitment to continue on the reform path and reinforce its partnership with the EU.

The meeting also tackled common challenges facing Morocco and the EU in the region. In this respect, Mezouar said Morocco is willing to further cooperate with the EU to face security threats to the region, including terrorism and all sorts of trafficking.

On the situation in the Sahel and Africa, Mezouar shed light on Morocco’s multidimensional approach that incorporates the religious dimension along with human development and economic considerations through an active participation of the private sector and the exchange of expertise with countries in the region.