Rabat - Real Madrid announced the creation of a new school of football in the city of Mohammedia in partnership with oil refiner La Samir and Mustapha Bakkoury's Fatema foundation. 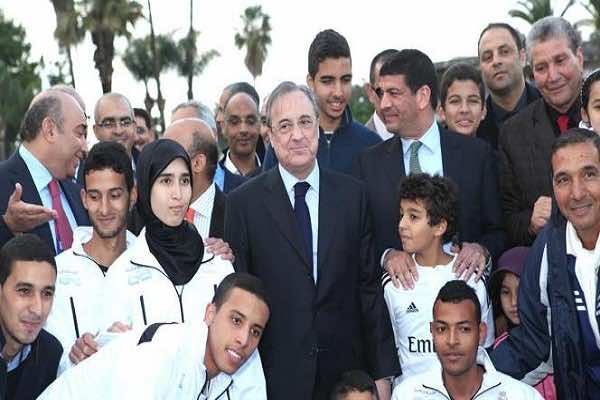 Rabat – Real Madrid announced the creation of a new school of football in the city of Mohammedia in partnership with oil refiner La Samir and Mustapha Bakkoury’s Fatema foundation.

The Spanish club president Florentino Perez and Secretary General of Moroccan Party of Authenticity and Modernity (PAM) Mustapha Bakkoury inaugurated on Monday in Mohammedia a new football school aimed at teenagers and children from underprivileged and disadvantaged backgrounds.

Created on the Real Madrid model, the new football school will be financed and managed by Fatema Foundation with the support of national oil refiner La Samir.

“This school is a social project to train young people and to improve their social conditions,” La Samir President Jamal Baamer was quoted as saying.

“The initiative is a first in the Mohammedia-Casablanca region where other institutions will emerge soon,” he added.

From his part, Real Madrid President expressed his admiration for Morocco and the fact that his club is very popular among Moroccan football fans.

“I love Morocco very much, to whom I am thankful for the affection towards my team,” Perez said.

“While on Moroccan soil, Real Madrid feels like home. Real Madrid is associated with 500 training centers in the world, where 48,000 children learn and play football,” he added.