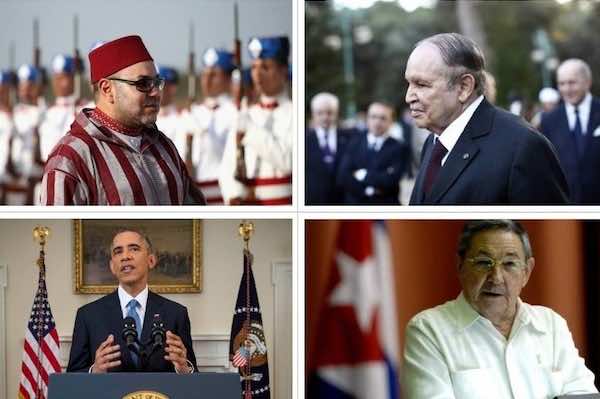 San Francisco – Reading the news this morning that Cuba and the United States will reestablish their diplomatic relations after 50 years of hate on both sides, I immediately started to think about our relationship with our Algerian neighbor, and came to realize that if they can do it, we can do it.

I am not a big fan of Obama after his refusal to help the Syrian people in the face of the massacre imposed on them by Bashar al-assad and his clan, but for having the courage to mend fences with America’s Archenemy, I have no choice but to command him on this surprising and courageous decision. He said “These 50 years have shown that isolation has not worked,” and “It’s time for a new approach.” I could not agree more with him.

If you take some time and ponder on our relationship with Algeria, you will quickly realize that it  is not as bad as the one between US and Cuba. The reason is unmistakably  the Algerian and the Moroccan people. We hold each other in high esteem and we have the utmost respect for one another. We have the same traditions, culture, language, and religion.

Of course our relationship has not always been rosy. There is a minority who thinks that we are better off as separated nations, but those of us who care, and we are many, should not fall prey to the cold war mentality. We need to stop being complacent and start asking for the change of the status quo that none of us is benefiting from.

If you follow this rocky relationship between the two neighbors, you will notice that one of the biggest obstacles to peace, is the perpetual blame and accusations from both sides, and in the last few months we have witnessed a barrage of that. Each side is telling its people that “we are the good one and they are bad one.” In fact none of them is good or bad, it is up to the people to decide. We are smart enough to decipher the culprit.

For the many of us who care about the peace in our region, let us insist that the  Moroccan and Algerian officials change course and get the courage to follow Obama’s step who had the audacity to flip the page. Moroccans and Algerians have more in common than the Cubans and the Americans, who, in spite of their differences, decided to work for lasting peace. So why not us? What should we continue tolive a life of endless hate? Are we that vengeful?

We should know by now that blaming the powers in both countries has not helped an iota. Let’s try a new approach. How about if we the people start encouraging our leaders to start thinking about the so-called Western Sahara, the main issue that separates us, from a different angle? Perhaps instead of using their official news agencies to cry foul, they could use a more diplomatic way to discuss their grievances. The Americans were talking to the Cubans in total secrecy. We should do the same thing. It’s the best approach and no one would know who was at fault in the first place.

Let’s put everything on the table and see what we can do. We simply cannot continue harming each other. We need to evolve. I have no doubt in my mind that the authorities in both countries will eventually realize that their current approach is not helping the people they preside over. I just hope that the day will come sooner rather than later.