Rabat - It seems that Real Madrid are enjoying their stay in Marrakech. 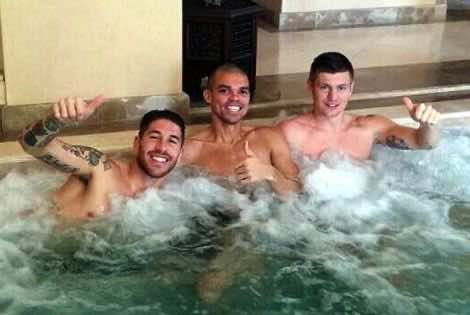 Rabat – It seems that Real Madrid are enjoying their stay in Marrakech.

Real Madrid defender Sergio Ramos has been on social media, posting a picture of him, accompanied by Portuguese defender Pepe and German midfielder Toni Kroos.

He wrote on Twitter: “Morning in the gym, physio and water with these 2 beasts, @officialpepe and @tonikroos. Let’s go!!”

“Starting to feel a bit like #Alan Shearer with these headers! Moroccan Madridistas were incredible tonight #21 #halamadrid”

The Los Blancos were impressed by the atmosphere in the red city in addition to the graciousness and the warmth of the Moroccan fans.

The Italian said in a press conference held after the semifinal match against Cruz Azul: “I applaud the Moroccan public for supporting us in this match. Real Madrid is a global team, and whenever we go, we find fans who support us.”