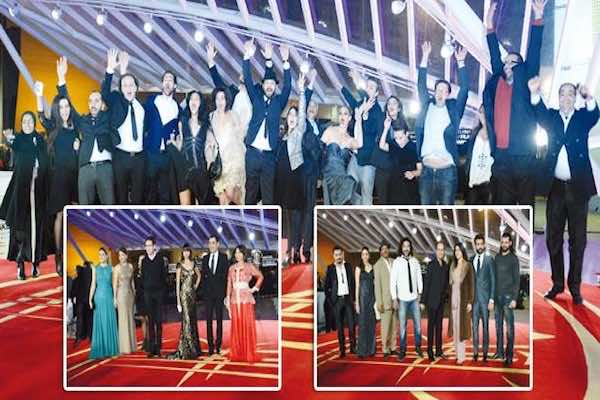 Rabat – Are we really celebrating the fourteenth edition of the Marrakech International Film Festival? Given the deterioration of this edition that is marred by bad organization, improvisation, chaos, and recklessness, this festival failed to step up to the plate and marked a disastrous regress.

What happened is a sign for all the festival organizers to reconsider their preparation plans for the next edition in order to put the festival back on track and restore what had been created 14 years ago. It should bring under its umbrella competent professionals and specialists—not incompetent people from outside the realm of art.

The fourteenth edition of the Marrakech Film Festival is the worst since it first started in 2000. The festival lasted from December 5 to 13, and it was a total marginalization of competent staff and professionals while so-called artists and pop singers were invited. Al Masaa newspaper noted the presence of people who had nothing to do with the film: the majority of the audience was beauty queens, fashion models, and TV show hosts. While it is a given that any international festival should lay the red carpet before all those whose names appear in the festival’s register, it is only proper to then invite professionals and real artists of film, in addition to business men that sponsor the event. Then come political figures, actors, directors, artists, critics, writers, etc. Lastly come the people who work in TV and fashion models—but it is the opposite that happens in Marrakech.

This is why we should ask the following question to the event organizers and those in charge of the guest list: “Is favoritism a staple of the festival’s guest selection process?”

The administration of the festival fell into a serious trap. The opening ceremony was lame and the only thing that protected its reputation is the presence of the artist Adel Imam, who was honored that night. As for the second night, the honoring of British artist Jeremy Irons saved it once again. However, the third day of the festival was marked by honoring the American actor, producer, and poet Vigo Mortensen, and was disastrous by all means. Some very famous Moroccan and Arab figures who attended the two first days did not come on that day due to other commitments, while others left after spending an all-expenses-paid weekend.

Twenty minutes before the start of the festival, the awards room was still empty, which made the organizers order the security guards let in the audience that was decorating the red carpet. They filled out the huge conference hall so that the honored actors and guests of the festival—especially the American Ambassador Dwight Bush and his team—would not notice the scandal of the empty hall.

The same thing happened on the fifth day of the festival during a very cold night. The Japanese delegation, formed of Japanese film industry’s pioneers and lead by the famous director Hiro Kazua Korida, walked the red carpet without an audience. The audience in the conference hall was very small, and the people outside were again asked to fill the seats.

The Despicability of the Arabic Language

How is it that a question asked in Arabic could be ignored by the jury in a festival organized on Moroccan soil?

The highlight of the press conference took place the second day of the festival in an open meeting with the members of the official jury, headed by French actress Isabelle Huppert.

The question was ignored was because the lady that accompanied the jury did not understand a single word in Arabic, even though she is Moroccan. Furthermore, no translator was hired by the festival administration for translation from Arabic to either French or English; however, translation from French into English was available.

Despite of the presence of the Moroccan editor Moumen Smihi among the jury, the latter did not think of intervening or answering that question. The dangerous thing about this is that he preferred to respond in French when he was asked a question (in French), which questions the point of having a Moroccan among the jury.

This press conference confirms that French is the first language of a festival that takes place in Moroccan territory, and many cinematic activists described it as a French festival organized in Morocco.

To demonstrate this more clearly, the French presenter Lauran was the first to give his speech during any opening ceremony, where he greets in French before his colleague Fairouz El-Kerwani, in charge of presenting in Arabic. If the subtitling is available in three languages—French, Arabic, and English—what is the use of having a French presenter who will cost the administration additional expenses?

French hegemony is not only a matter of language, but also throughout different aspects of the festival. The power of the French strengthened in a very dangerous way after Moroccans subscribed to the belief that it is beneficial to get assistance from foreign expertise on the condition that things will become “Moroccanized” over time. It was believed that skilled Moroccans would be included in the festival, but the opposite occurred when French names became more popular.

In order for the French to prove their success and merit, they seek assistance of losers and close the door to opportunities before Moroccans are able to take over and lead a very important Moroccan cinematographic event into the future.

During this edition, it was clear that Melita Toscan Du Plantier has extended her power and became the manageress of the festival; she inherited her husband’s place in the festival and immediately became its manageress in 2004. Before marrying him, she was a receptionist at the French Cannes festival, and her name always came first in speeches.

The manageress of the festival sympathizes with her fellow French nationals, which is why there are three French members of the jury—a jury that is supposed to be multicultural. Isabelle isabelle Huppert is the only famous figure among the three French members of the jury, while the other two are known only by the manageress and her colleague the art manager. This last one, Bruno Bard, sends terror and fear into the hearts of his employees. His staff are intimidated before every meeting with him because he does not miss an opportunity to humiliate and make fun of Moroccans.

Did the festival of Marrakesh become a resort for relaxation rather than to celebrate great cinematographic works? The guests of the festival preferred to be seen during the first two days and walk on the red carpet, then vanish during the rest of it.

Over 120 foreign journalists covered the fourteenth edition of the International Film Festival, among which 50 were French. They were given special treatment by the festival administration. All the necessary work conditions were made available to them, unlike national journalists who were prevented from accessing the wifi the first days of the festival. Only after protest did they obtain free access.

Some of the media outlets—especially the French—did not write a single word about the festival, while others preferred to write about a party thrown by Christian Dior, a partner in the festival.

Furthermore, people who have no link with the cinema prosper in Marrakech, while Moroccan artists are marginalized. A TV presenter from Saudi Arabia who works for a Dubai-based channel based was invited, along with her sister (the famous singer Asil Imran) and a dentist that works on celebrities’ smiles. Additionally, there were many Arab channels whose presence added nothing to the festival and they left after only 5 days. Then, the festival administration resorted to Moroccan artists last Wednesday. Some of them came, but others boycotted the festival because they felt that they were just seat fillers at the conference hall.

When will we be weaned from the era of amateurism and establish the era of professionalism for the Marrakech International Film Festival? It is considered the light at the end of the tunnel for the Moroccan art scene, but as of late, this standard has not been met.

This article was first publish in Arabic at Al Massae and translated into English by Mona Badri. Edited by Katrina Bushco