Rabat - Around $10 billion in illicit capital flowed out of Morocco from 2003 to 2012, facilitating crime, corruption, and tax evasion, according to a recent study released Tuesday by Global Financial Integrity (GFI), a Washington DC-based research and advisory organization. 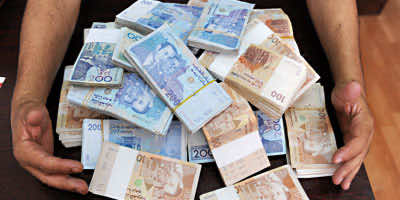 By
Aziz Allilou
-
Aziz Allilou is a student at the Higher Institute of Media and Communications (ISIC) and Morocco World News correspondent in Rabat.
Dec 21, 2014
Spread the love

Rabat – Around $10 billion in illicit capital flowed out of Morocco from 2003 to 2012, facilitating crime, corruption, and tax evasion, according to a recent study released Tuesday by Global Financial Integrity (GFI), a Washington DC-based research and advisory organization.

The report has revealed that crime and corruption are draining a record $991 billion a year from low and middle-income nations, including Morocco. The disappearance of the so-called “dirty money” hits some of the world’s poorest regions the hardest.

Morocco ranked 59th on the report’s Country Rankings by Largest Average Illicit Financial Flows, 2003-2012.  According to the report, Morocco had a record $998 million in unrecorded funds in the past nine years.

Overall, the report found that between 2003 and 2012, the estimated amount of illicit funds coming from developing countries totaled $6.6 trillion, and rose at an inflation-adjusted rate of 9.4 percent a year, which is “double global GDP growth.”

The report said that illicit financial flows are particularly problematic in developing countries, where financial systems are often more vulnerable to corruption.

“Illicit inflows often deprive developing countries of significant customs duties, they facilitate crime, and they flow into the underground economy,” the report notes.

According to the report, China, Russia, Mexico, India, and Malaysia saw the largest outflow of dirty money. The report revealed that these countries export $1 trillion a year in laundered funds, drugs, and under-the-table payments.

Sub-Saharan Africa, on the other hand, suffered the biggest loss as a share of its economy, with the amount of dirty money averaging 5.5 percent of GDP. Nigeria and South Africa were among the top 12 countries with the largest volumes of illicit funds.