Taroudant - The Real Madrid striker Cristiano Ronaldo inaugurated his own bronze statue in his hometown on Sunday December 21 at a ceremony where he was honored. The statue did not go unnoticed. 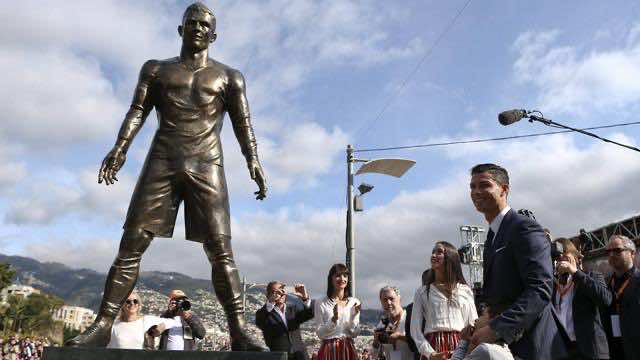 By
Larbi Arbaoui
-
Larbi is a freelance writer and assistant editor at Morocco World News.
Dec 22, 2014
Spread the love

Taroudant – The Real Madrid striker Cristiano Ronaldo inaugurated his own bronze statue in his hometown on Sunday December 21 at a ceremony where he was honored. The statue did not go unnoticed.

After his team, Real Madrid, won the 2014 FIFA Club World Cup on Saturday, the Portuguese footballer flew to his hometown to unveil his own 3.40 m high bronze statue.

Cristiano posted a photo of himself with his own family before his own statue with a statement that reads:

I feel so proud to be honoured with a statue in Madeira. It’s a huge joy to share this mome… http://t.co/0PxRpyOc6q pic.twitter.com/afbBvaGQPN

The logo of his underwear company (CR7) engraved on the statue and his obvious organ have created a buzz among social media users. A twitter user posted: Today Crisitiano Ronaldo inaugurated his own statue … There would not be a problem?

Other tweet criticize Cristiano’s obvious organ of his own statue.

I always said he was a brig prick! Sculptor obviously misheard! #RonaldoErection pic.twitter.com/rHzvZXfk6A

How exciting! @Cristiano Ronaldo “erects” statue of himself outside personal museum. http://t.co/RcLBQhP7NA pic.twitter.com/793ip7Ieta