Rabat - The Tangier Med Port hit on Tuesday the record of three million twenty-foot equivalent unit (TEU) containers, that is a rise by 20% compared to the figure of 2.55 million TEU containers in 2013. 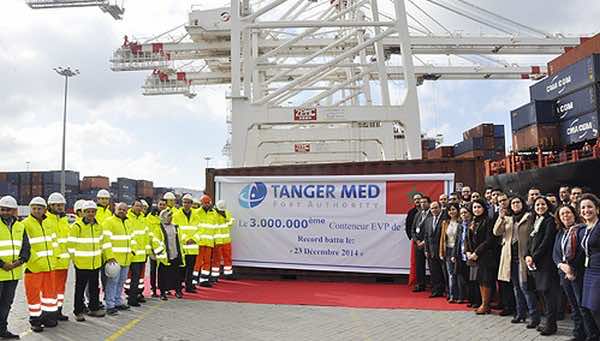 Rabat – The Tangier Med Port hit on Tuesday the record of three million twenty-foot equivalent unit (TEU) containers, that is a rise by 20% compared to the figure of 2.55 million TEU containers in 2013.

During this year, the Tangier Med 1 Port treated 2,100 ship stopovers (800 at APMT terminal and 1,300 at Eurogate terminal), and a traffic growing by 11% and 34% respectively, said director of Tangier Med 1 Port Rachid Houari at a press briefing with representatives of national and regional media outlets.

After only 7 years of servicing, the operational capacity was exceeded thanks to the involvement and collective action by all partners and staff, he said, adding that this exceptional performance and ongoing growth will be backed by the development of the future Tangier Med 2 Port.