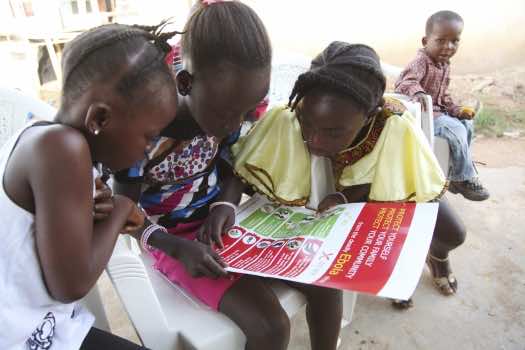 The sight of an Ebola patient is frightening. Sharon Washington, an employee of Liberia’s foreign ministry, got married in January this year at a colourful ceremony in the capital Monrovia. This writer attended the wedding. Later on, Mrs. Washington nursed her sister who was ill with what started as a mild fever until she got weak and started having severe muscle pain, chronic headache and sore throat. Thereafter, it was vomiting, diarrhoea, rash, impaired kidney and liver function, internal and external bleeding from all openings of the body — the eyes, mouth, and ears and finally, death. It was Ebola. Next, Mrs. Washington tested positive for the virus and, tragically, within a few days, she too passed away.

Long before the current Ebola virus outbreak, affluent citizens of the three most affected countries of Sierra Leone, Liberia and Guinea often sought medical attention abroad. While some visited premier medical facilities in Africa such as the Korle Bu Teaching Hospital in Ghana and others in Senegal and South Africa, the wealthy travelled to Europe or the US where hospitals are even better equipped.

Because of severe shortages of doctors, nurses, other health workers, medical facilities and equipment, many people in Africa do not trust their countries’ health systems. For example, with a population of about 4.2 million, Liberia has one doctor per 100,000 people, while Sierra Leone, with six million people, has two doctors per 100,000, according to the World Health Organization (WHO).

To put this into perspective, consider that Cuba, with a population of about 11 million, has about 600 doctors per every 100,000 people. The dire constraints of Africa’s healthcare systems coupled with crowded urban centres, explain why the Ebola virus disease, which first broke out in Guinea’s Guéckédou area in March 2014, quickly spread to Liberia and Sierra Leone.

According to the WHO, the mortality rate of the current Ebola outbreak is 55% and by early November 2014, more than 5,000 had died of the virus. Ebola is spread through human-to-human transmission via direct contact (through broken skin or mucous membranes) with the blood, secretions, organs or other bodily fluids of infected people, and with surfaces and materials (e.g. bedding, clothing) contaminated with these fluids. The incubation period for the virus from infection to the onset of symptoms is 2 to 21 days. Humans are not infectious until they develop symptoms. Patients can die within days or after a few weeks of symptoms.

In the three countries severely hit by Ebola, masked health workers in biohazard suits can be seen everywhere. Ambulance sirens blare through the main streets, carrying critically ill Ebola patients; newspapers carry banner headlines on Ebola daily; radio and television stations and social media focus on the disease. Billboards carry messages such as “Ebola is real,” “Don’t eat bush meat,” “Don’t touch the sick,” “Don’t touch the dead.” Nobody trusts anybody. No more handshakes, hugs or kisses — even on the cheek. People are now getting accustomed to the ritual of hand washing in chlorine-treated water. Most offices use thermometers to check workers’ and customers’ body temperatures for fever. And fever these days — any fever — is considered Ebola-related.

Why it spread so fast

“The health systems in our countries are very weak,” admitted Tolbert G. Nyenswah, Liberia’s Assistant Minister for Preventive Services, in an interview with Africa Renewal. Mr. Nyenswah chairs the National Ebola Incident Management System, established by the government to tackle the disease. Across the border in Sierra Leone, things are the same.

Ebola exposed the inadequacies of the region’s health systems. Medical services in Sierra Leone and Liberia lack good laboratory facilities and cannot detect some medical conditions in their early stages. Often times, diagnosis is done when it is too late for treatment, say medical authorities. “This dreadful virus has overtasked our public health facilities and capabilities,” said Liberian President Ellen Johnson Sirleaf. Good Governance Initiative, an NGO headed by former British Prime Minister Tony Blair, reported in November that 12 persons were dying from the disease every day in the affected countries.

Sierra Leone and Liberia fought brutal civil wars, which ended in 2002 and 2003 respectively, while Guinea has struggled with security issues, including military coups. The wars and insecurities decimated social infrastructure in these countries. Sierra Leonean Minister of Health AbubakarrFofana acknowledges that the region’s health systems need total rehabilitation.

Acute shortage of personal protective equipment and little or no incentives for frontline health workers did not help matters initially. Dozens of health workers died after contracting the virus while treating patients. Some infected foreign doctors and other humanitarian workers were flown back to their countries for better treatment. Government took a few missteps such as quarantining the densely populated West Point neighbourhood in Monrovia, a move protested by angry residents.

Lack of basic information about the virus and prevention methods contributed to its spread. From the outset, Guineans doubted that the virus existed and even attacked Médecins Sans Frontières (MSF) workers, accusing the humanitarian health aid organization of bringing a strange disease to their country. In September, Guineans killed eight journalists and aid workers in a village school near Nzérékoré, south-eastern Guinea, and dumped their bodies in a septic tank.

In Liberia, angry youths looted an Ebola centre in August in Monrovia’s West Point, carting away items including blood-stained mattresses. With the virus breaking in Kailahun, in eastern Sierra Leone that is also an opposition stronghold, Sierra Leoneans initially accused the ruling party of attempting to decimate the opposition. Also, fear of stigmatization dissuades many from going to hospitals and they are also afraid they might contract the virus there.

While previous outbreaks in the Democratic Republic of the Congo and Uganda were in rural areas, the current outbreak in West Africa found its way into populated urban communities. Traditional practices such as burial rituals and caring for the sick at home contributed to its spread.

For their part, the three most stricken countries are making frantic efforts to contain the virus. They have declared states of emergency, quarantined towns and villages and imposed curfews. “Anything and everything is being done to halt the spread of the virus,” says Liberia’s Information Minister Lewis Brown. Sierra Leone’s President Ernest Bai Koroma adds, “These are extra-ordinary times, and extraordinary times require extraordinary measures.”

International response has also been gaining strength. The UN established an Ebola Emergency Response Mission based Accra, Ghana, in late September – the first such for any disease by the global body. WHO director Margaret Chan appealed for greater international aid, including US$1 billion to limit its spread. While WHO estimates that the outbreak could potentially infect more than 20,000 people, the US Centers for Disease Control and Prevention warned of a nightmare scenario that could result in up to 1.4 million infections by January 2015. “This is an epidemic that is not just a threat to regional security, it’s a potential threat to global security,” said US President Barack Obama.

How Nigeria tamed the virus

Nevertheless, there have been some victories in the Ebola battle. Nigeria and Senegal have contained the virus. The Washington Post, a US newspaper, referred to Nigeria’s efforts as “an example of hope.”

How did Nigeria do it? Once Patrick Sawyer, a visiting Liberian-American diplomat, was confirmed as having the Ebola virus in Lagos, Nigeria’s city of 17 million people, the diagnosing doctor kept him in the hospital despite his protests and that of his government. Officials tracked the 281 persons with whom he might have had contact.

The diagnosing doctor, AmeyoAdadevoh, later died of the disease herself. Airport staff was unprepared and the government had not set up any hospital isolation unit, so he was able to infect several people, including health workers in the hospital where he was taken, some of whom had to restrain him to keep him there. Even when the virus found its way to the oil hub of Port Harcourt in the southeast, authorities were able to quickly contain it, an example WHO said others should be able to follow.

Health authorities in Nigeria saturated the media with information on Ebola. The country employed a ‘whole community approach,’ in which everyone, from military personnel to church leaders — who had received detailed briefing from health officials — educated grassroots Nigerians on the virus. Nigerians also actively used social media to disseminate Ebola-related messages. Another key strategy was that authorities and citizens celebrated the doctors, nurses and others who gave their lives to the struggle

As the Ebola virus continues to spark fears globally, the world is hoping for a vaccine and for aggressive, concerted efforts to contain the virus’ spread, as well as improved health systems in Africa.