Fez - The mental illness advocacy association UNAHM organized a sit-in in front of parliament in Rabat to ask for an urgent intervention from the authorities to guarantee rights for the mentally challenged that follow universal United Nations conventions. 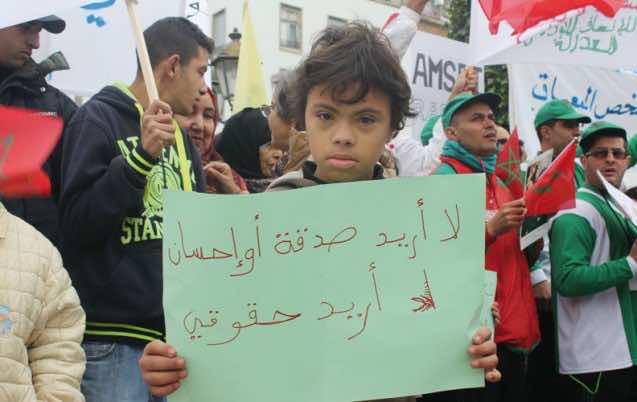 Fez – The mental illness advocacy association UNAHM organized a sit-in in front of parliament in Rabat to ask for an urgent intervention from the authorities to guarantee rights for the mentally challenged that follow universal United Nations conventions.

UNAHM was formed two years ago to defend and improve the rights of mentally ill persons, aiming at decreasing their hardships in Morocco.

Approximately one thousand people, including different national associations, supported the sit-in’s participants. They called for the betterment of 347,000 people with mental disabilities.

“I do not want charity or compassion, I want my rights,” said a sign held by a child with Down syndrome in the crowd.

The participant called for urgent practical and viable solutions to the problems that mentally ill children suffer.

At a weeklong conference held in Casablanca, UNAHM insisted on the need to put the issue of mental disability among “national priorities.”

UNAHM had already urged the government to devote a special budget to educate mentally challenged children and increase the number of beneficiaries from special services. It also called for an action plan and a strategy consistent with the Constitution and United Nations conventions.