Morocco World News
Home News Morocco Gone But Not Forgotten: Morocco’s Celebrities Who Left us in 2014

Rabat - Morocco mourns the loss of a number of celebrated characters this year.  From the dean of “Taqtouta Jabaliya”  Mohamed Laaroussi in February to famous professor and futurologist Mehdi El Mandjra in June  and Minister of State, Abdellah Baha, in  December; these are individuals who have left momentous contributions in their chosen fields though they have left us forever. 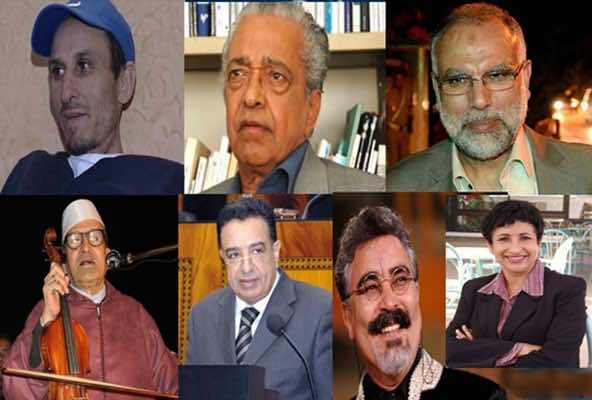 Rabat – Morocco mourns the loss of a number of celebrated characters this year.  From the dean of “Taqtouta Jabaliya”  Mohamed Laaroussi in February to famous professor and futurologist Mehdi El Mandjra in June  and Minister of State, Abdellah Baha, in  December; these are individuals who have left momentous contributions in their chosen fields though they have left us forever.

Today Morocco World News pays tribute to the famous and influential faces who passed in 2014.

Mohamed Laarousi, a poet, songwriter, composer and singer who followed his love of music and left the M’sid (a place where children learn Qur’an and the ABCs of religious studies) in order to write, compose and sing songs. He was considered one of the first deans of “Taqtouta Jabaliya,” a popular Moroccan genre of music performed with traditional instruments, especially in the mountainous areas and in the north-west of the Kingdom.

His love for Morocco and his struggle against colonialism were echoed in his music, and performed through his remarkable voice. His music forms a rich reference for researchers and anybody interested in “Jbala” art that thrives in many Moroccan regions such as Chefchaouen, Ouazzan, Tangier and Tetouan. Mohamed Laarousi passed away on February 14 in Fez, at the age of 80, after a long illness.

Writer, futurist, economist, and sociologist, Mahi El Mandjra held very important positions in significant academic institutions and NGOs in Morocco and abroad, such as University Mohammed V, UNDP, and UNESCO. He produced many publications and over 500 articles in the humanities and social sciences. He was honored and decorated in different parts of the world, including Jordan, France, and Japan.

However, he had not been given his due and his lectures have been banned even today in Morocco. In a statement to Al-Quds Al Arabi, he said that he had been banned more than ten times since 1999 on account of his lectures.  El Mahdi El-Mandjra is internationally known as a futurologist and one of the co-founders of the International Federation of Futurologist Studies. One of his famous ‘prophecies’ is what came to be known as ‘The Arab Spring’. He was very respected and loved by the Moroccan people and died on June 13.

Ahmed Zaidi was a journalist, politician and member of parliament. He worked as an editor in chief and TV anchor at the National Television for more than 20 years. During this period Ahmed Zaidi set up Press Club of Morocco.

Politically, Ahmed Zaidi made his first appearance in the Moroccan political scene in the communal elections of 1976 and was the youngest candidate. He eventually became one of the significant leaders of the Socialist Union of Popular Forces USFP. He became a member of the parliament in 1993. In 2007 he became the president the USFP group in the House of Representatives, the lower chamber of the parliament.

Ahmed Zaidi died on November 9 as he was trying to cross the Sherat River, near Rabat, to reach his home. While trying to reach his house, Zaidi reportedly did not realize the high level water of the river as a result of the rainfall in Morocco at that time. His car fell from a bridge in the Oued Cherrat. He was alone in the vehicle.

Abdellah Baha was Minister of State and one of the most influential leaders the Party of Justice and Development. He a served as deputy secretary general of the Justice and Development Party (PJD) since 2004. He was MP for Rabat for three consecutive terms, beginning in the 2002 legislative elections. This native of Souss was vice-speaker of the House of Representatives (2007), head of the PJD Group (2003/2006) and president of the Commission of Justice, Legislation and Human Rights (2002/2003). A member of the Executive Office of the uniqueness and Reform Movement (MUR), he was director of publication of the daily “Attajdid”, as well as “Al Islah” and “Arraya.

Abdellah Baha’s death sparked controversy in Morocco as he died in the same place as the late Ahmed Zaidi.  He was hit by a train on December 7 near the Sherat River. The departed’s friends from PJD said that he was visiting the place where Ahmed Zaidi died and did not pay attention to the train while he was crossing the railroad.

Born in Khouribgha in 1954, Mohammed Bastaoui, an artist and producer left a rich history of success in Moroccan Cinema and Television. He started his artistic career in theatre with “Masrah al Yaoum” and “Masrah Achams.” Moroccan fans knew the late artist largely through the series “Dwyer Zman,” and “Janan karma” by Moroccan director Farida Bourkia. The Late Mohamed Bastaoui was best known for his role as a Bedouin man in several movies and TV shows. He was a well experienced and bright artist who wielded influence in Moroccan art at large. He died on December 17 after fighting a lengthy illness.

Fatima Aouam was a former middle distance runner. She was one of the most prominent Moroccan runners in the 1980’s. She won three medals at the Arab Games in Casablanca in 1985, and was crowned champion of Africa winning two gold medals in Algeria in 1988.

In 1987 she broke the two mile world record in Italy, becoming the first Moroccan, Arab and African woman to achieve that result. In 1988, she became the first Moroccan woman to reach the 14 finals of 1500 meters at the 1988 Seoul Olympic Games. She was crowned Morocco’s athlete of the year in 1987.

Fatima Aouam passed away on December 27.