Taroudant - Following the list of the Moroccan Men who Honored their Country in 2014, Morocco World News is delighted to share with its audience the list of top women who are a source of pride to their homeland through their positive contribution and exceptional achievements, either abroad or at home. We deliberately made both lists into two separate articles only because these honorable names, who raised the flag of their homeland higher, are numerous to be included in one article. 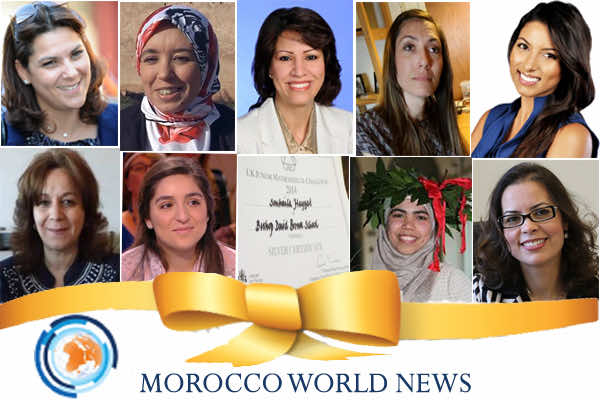 By
Larbi Arbaoui
-
Larbi is a freelance writer and assistant editor at Morocco World News.
Dec 29, 2014
Spread the love

Taroudant – Following the list of the Moroccan Men who Honored their Country in 2014, Morocco World News is delighted to share with its audience the list of top women who are a source of pride to their homeland through their positive contribution and exceptional achievements, either abroad or at home. We deliberately made both lists into two separate articles only because these honorable names, who raised the flag of their homeland higher, are numerous to be included in one article.

The list of Moroccan women who excelled in their respective fields and made international headlines in 2014 is as follows:

According to Forbes, Mansouri has, “Significantly cut down on graft, and is widely credited with introducing transparency, accountability and efficiency within Marrakech’s 96-member city council.”

After an extended experience teaching abroad in Massachusetts, Missouri, and Egypt, Mrs. Souad Belcaid returned to her home country, Morocco.

Thanks to her dedication and devotion to the honorable field of teaching, the Moroccan teacher at the American School of Tangier has made it to the top 50 finalists early December, in an international competition to find the world’s best teacher.

Belcaid is the only teacher in North Africa shortlisted for The Global Teacher Prize, a competition established by the Varkey GEMS Foundation with a grand prize of one million dollars, “to celebrate one outstanding teacher.”

After she climbed on June Mont McKinley, the highest mountain peak in North America, with a summit elevation of 20,237 feet above sea level, the Moroccan mountaineer Bouchra Baibanou pursues her dream of being the first Moroccan and Arab woman to climb the seven highest peaks in the world. She waved the Moroccan flag on the many highest picks of the world.

An engineer at the Ministry of Equipment and Transport, she has found great delight in ecotourism and nature.

Being the only North African woman included in this ranking dominated by Pakistanis, Elouafi, food safety champion, is among the eight scientists listed under “the shapers” category.

Moroccan American Nadine Hanafi was honored in November at the United Nations headquarters in New York among the most successful young entrepreneurs in the United States.

Nadine was chosen for being the founder and CEO of We Are Visual, a creative agency dedicated to eradicating mediocre presentations and empowering people to turn PowerPoint into a powerful communication tool that enhances their message rather than a design liability that puts their audience to sleep.

Last July, Myriam Bourhail, a Moroccan high school student in Dumas city, surprised everybody after she received the highest Baccalaureate exam score in France. Scoring 21.03 out of 20 (799 points out of 760), Myriam honored herself and her home land after a year of devoted studying and hard work..

After her amazing achievement in France, Bourahil have been received and decorated by the King Mohammed VI, during the feast of the throne held on July 30.

Despite the tragic accident that left her quadriplegic, Moroccan-born artist Mariam Fatima Paré did not give up her dream to become a professional painter, an art she loved ever since she was a little girl.

The artist, 38, learned to paint wonderful drawings with her mouth and develop her passion for painting after a stray bullet struck her while driving nearly 20 years ago and left her paralyzed.

Mariam, learned how to control a pencil using her mouth with the help of intense rehabilitation with her physical therapist.

Originally from Salé, Morocco, Zhouri is currently working on her certification in management at Harvard University.

Doha Badrane is another example of successful and determined women who honor their country.

After years of hard work and dedication, Doha Badrane, a Moroccan woman who lives in Italy, has been licensed to practice as a surgeon by the medical authorities in Italy making her the first Moroccan doctor to complete all of her medical studies in Italy.

Doha Badrane defended her thesis in Medicine and Surgery about the monitoring of hepatitis A and the management of epidemics.

In the footsteps of Bourahil, the Moroccan student Souhaila Hayyat from Bishop David Brown School in London received in August the Silver Award for her outstanding performance at the 2014 UK Junior Mathematical Challenge.

The Moroccan student received a Silver Certificate from the UK Junior Mathematical Challenge in recognition of her outstanding performance in the mathematics competition.

All these outstanding women have one point in common: they are highly educated. As George Washington Carver put it, “Education is the key to unlock the golden door of freedom.”