Rabat - Many Muslim football players across the European continent kneel down to prostrate before God in celebration for scoring a goal. 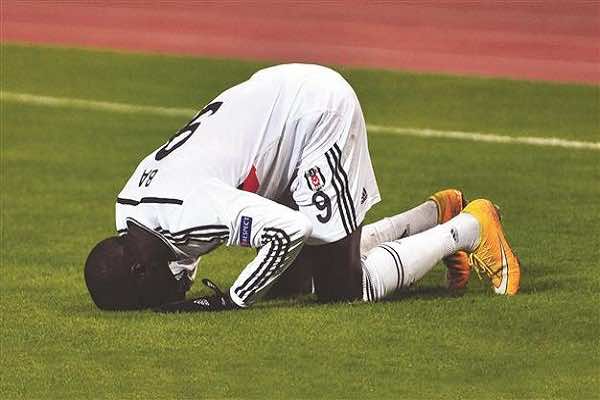 Rabat – Many Muslim football players across the European continent kneel down to prostrate before God in celebration for scoring a goal.

This time, a similar celebration by Be?ikta?’s Senegalese footballer Demba Ba has stirred a religious debate in Turkey.

According to media reports, a popular cleric said that Ba’s goal celebration is a sin, adding that the act of prostrating before God cannot be performed in a random direction instead of toward the Kaaba.

“Our qibla is the Masjid al-Haram until doomsday,” Ahmet Mahmut Ünlü, known as “Cüppeli” (Robed) Ahmet Hoca among his followers, was quoted as saying.

In an interview with CNNTurk, the controversial scholar said that ‘such random prostrations are “unappreciated and sinful”, adding that they are ‘wrong and something dangerous.”

“We would appreciate any Islamic signs by artists, sports people or celebrities. This would bring Islam forward. Kids would wonder what this person is doing. But qibla is obligatory in glorifying prostration,” he said.

The Senegalese international scored 16 goals in 20 official games for the Turkish side of Be?ikta?.

Not all clerics see the celebration as sinful, others are more open and appreciative.

“It is not a sin but permissible to do it wherever you would like to,” said Professor Hayri K?rba?o?lu of Ankara University’s Faculty of Theology.

“Sometimes it is not enough to be grateful with words only, and people want to express it with all their organs,” he added.