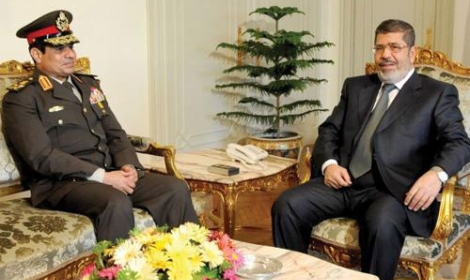 San Francesco – Thursday evening, Morocco’s  news Channel referred to the Egyptian president, Abdel-Fattah al-Sisi as the architect of the military coup, and to Mohamed Morsi as President-elect. This is clearly a new development in the relations between Morocco and Egypt,  the majority of Moroccans watching the news last night were shocked and could not believe what is taken place.

The questions Moroccans are now asking is: What happened? What made Morocco take a U turn?

Since El Sissi’s coming to power, Moroccans have witnessed a barrage of attacks and insults from Egyptian television anchors and movie stars to religious leaders but never from any Egyptian government officials.

It is no secret that El Sissi and his government are doing everything possible to get on the good side of Algeria and some unconfirmed reports indicate that Egypt is now subscribing the Algeria’s doctrine regarding the Moroccan Sahara. Could this be the reason Morocco is throwing the first punch?

One thing is sure; this move is a shock to many observers and will consequently engender a big battle for Morocco in the international Arena in the coming months. Let’s hope that it is not a careless move on the part of the decisions makers in Morocco.