Rabat - With reports talking about Islamic extremists being linked to the Charlie Hebdo attack, a new hashtag under the name #killallmuslims is currently Twitter trending globally. Rabat – With reports talking about Islamic extremists being linked to the Charlie Hebdo attack, a new hashtag under the name #killallmuslims is currently Twitter trending globally.

The #killallmuslims hashtag went viral on Twitter following the Wednesday terrorist attack on the Paris offices of French satirical weekly magazine Charlie Hebdo, causing the death of 12 people, including 10 journalists.

Using the #killallmuslims hashtag, many social media users have taken advantage of the Charlie Hebdo attack to express their Islamophobic feelings. 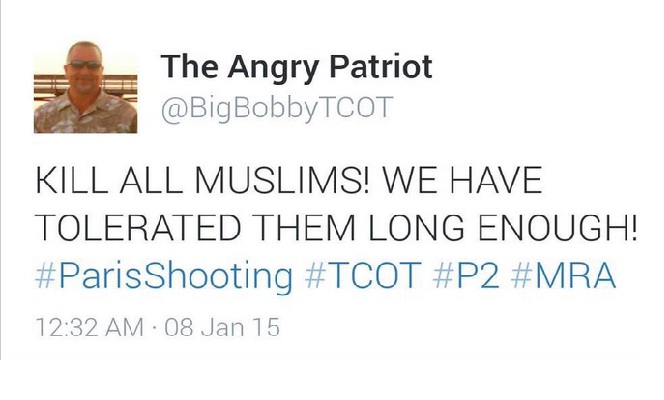 The hashtag has been tweeted more than 56,766 times in the 24 hours following its initiation, according to social media tracker Topsy.

However, other social media users decided to fight back against the Islamophobic reactions.

How can French be trending #KillAllMuslims ? A Muslim police man was shot dead yesterday for protecting you French people! — Wildan Ardi (@Wildan_Safee) 8 Janvier 2015

They created another hashtag called #?SaveHumanity to say the attack on Charlie Hebdo do not represent neither Islam nor Muslims.

According to media sources, French authorities have identified the perpetrators of the attack as 34-year-old Said Kouachi and 32-year-old Cherif.

They were both born in Paris and hold the French citizenship. They are both of Algerian descent. The third person is 18-year old Mourad Hamyd whose nationality has not been disclosed yet.

Some twitter users in France are opposed to reports that claim Mourad Hamyd is one of the attackers who were responsible for the massacre of 12 people, saying he is innocent.

These students who claim to be Mourad’s friends launched the hash-tag “#MouradHamydInnocent,” on social media. It has become one of the most trending hash-tags on twitter and Facebook in France.