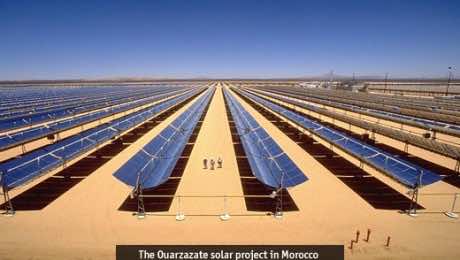 The two plants totaling 350 megawatts are the second phase of the 500MW Ouarzazate project, which aims at producing 2 gigawatts of solar energy by 2020, Reuters said quoting a statement by the Moroccan Solar Energy Agency (MASEN).

ACWA Power is already building a 160MW plant in the first phase of the project.

ACWA’s consortium, which includes Spain’s Sener, had priced its offer at 1.36 dirhams ($0.15) per kilowatt (KW) for the first 200 MW plant with parabolic mirror technology, while it priced the plant with solar power tower technology at 1.42 dirhams per KW.

Consortiums led by Spain’s Abengoa, GDF’s International Power and ACWA Power were pre-selected for the 200 MW (Noor II) tender. The three groups were also pre-qualified for the 150 MW (Noor III) tender, along with another consortium led by Electricite de France (EDF).

The plants are scheduled to start generating power in 2017.

To finance the plants, Morocco has secured loans of $519 million from the World Bank, 654 million euros from German state-owned bank KFW and the rest from the African Development Bank (AfDB), the European Commission and European Investment Bank, added Reuters.

The Ourzazate project is expected to generate an equivalent of 38 percent of Morocco’s current installed generation capacity.