Helsinki - Morocco has always endeavored to promote the strategic bases of its relations with the European Union under the advanced status, Minister delegate for foreign affairs Mbarka Bouaida said Wednesday. 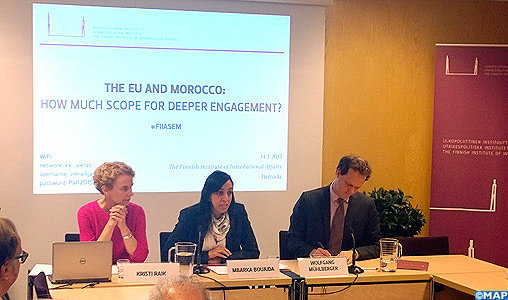 Helsinki – Morocco has always endeavored to promote the strategic bases of its relations with the European Union under the advanced status, Minister delegate for foreign affairs Mbarka Bouaida said Wednesday.

“Recognizing the importance of his role as a bridge between Europe and Africa, Morocco has made regional integration a priority in its strategic approach with its partners, including the EU,” Bouaida said before an audience of diplomats, experts and scholars at the prestigious Finnish Institute of International Relations.

She also noted that the Kingdom, the first country in the MENA region to get an advanced status with the EU, has always sought to build a strong, strategic and multidimensional partnership with Europe.

According to the minister, the path of partnership between Rabat and Brussels has been characterized by a continuous enrichment and the ability of both parties to renew their ties in a sustainable manner in order “to make this relationship a success.”