Paris  - The stance of France over the Western Sahara issue is well-known and remains unchanged, said spokesperson of the French foreign affairs ministry Romain Nadal on Wednesday. 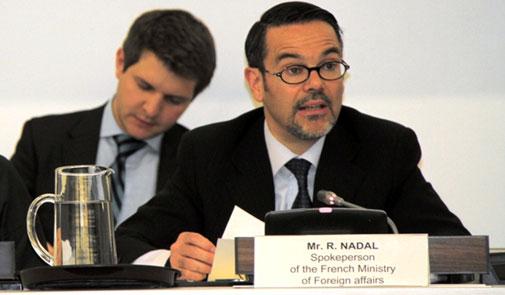 Paris  – The stance of France over the Western Sahara issue is well-known and remains unchanged, said spokesperson of the French foreign affairs ministry Romain Nadal on Wednesday.

Answering a question, at a press briefing, about the attendance of French Agriculture minister and government spokesperson Stéphane Le Foll of an event organized by the polisario in the city of Le Mans, the spokesperson of the French foreign affairs ministry said that France supports the search for a just, lasting and mutually-agreed solution, under the UN aegis and pursuant to UNSC resolutions.

Nadal underlined that Le Foll did not attend any polisario-held activity. The French minister took part only in the well-wishing ceremony for the mayor of Le Mans which was attended by local associations, he noted.