By Franck  Kuwonu and Lisa White* 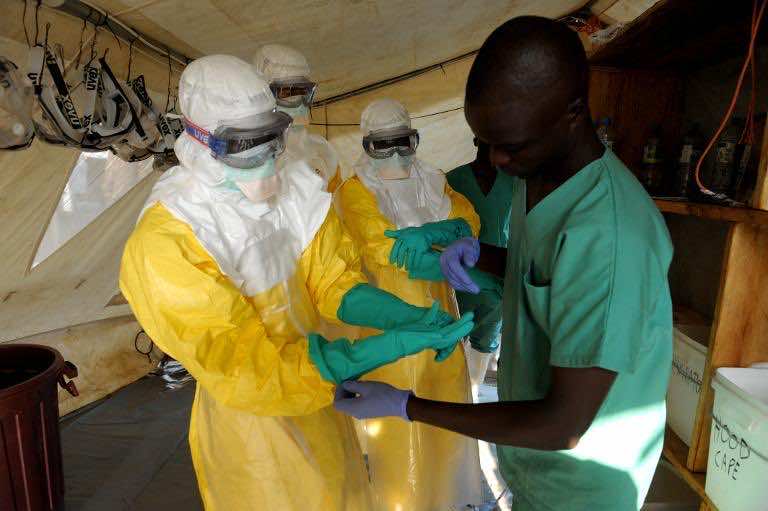 By Franck  Kuwonu and Lisa White*

At the entrances to private and public buildings in Monrovia, Liberia’s capital, a new custom has emerged since the outbreak of the Ebola virus: visitors wash their hands upon entering and exiting. Tap buckets conveniently placed in hallways dispense a mixture of water and chlorine or bleach from which people wash their hands.

Gone are some of Liberians’ endearing social rituals such as a kiss on the cheek, friendly hugs or handshakes, or warm embraces between parents and children. Since the Ebola outbreak, authorities have been advising the public to be more hygienic, including frequent washing of hands and avoiding physical contact with bodily fluids from the sick or dead bodies.
Traditional family care practices and burial rituals that involve close contact with an infected body have contributed to the rapid spread of the disease. Customarily, Liberians wash, clean and dress the remains of their loved ones before interment.

People have also been warned against eating game meat, what Liberians call bush meat. In rural areas, bush meat is an important source of protein and income for hunters. Communities are being compelled to change their diets. Experts believe fruit bats are the carriers of the virus.
Ebola has changed the way people relate to each other at home and at work.
*Lisa White works for the UN Mission in Liberia.

The first case of Ebola was reported inAugust 1976 in the Yambuku District of Zaire, now the Democratic Republic of the Congo (DRC), by Dr. Peter Piot, a Belgian microbiologist, who currently heads the London School of Hygiene and Tropical Medicine, and a team of infectious disease experts. The outbreak occurred near the Ebola River, earning the virus its name.

A second outbreak, called Sudan ebolavirus occurred in Sudan between June and November 1976. While the spread of the earlier virus was contained within a 70km radius of Yambuku, the Sudan ebolavirus spread acrossfour towns – Nzara and Maridi, which saw the most cases, and Tembura and Juba.

A 1978 report by the World Health Organisation (WHO) states that the 1976 Zaire ebola virus, in which 318 people were infected and 280 died, began at the Yakubu Mission Hospital after a patient was treated for what was then thought to be malaria. Elevenout of the 17 hospital staff died in that outbreak.

Though the Ebola virus strains in the DRC and Sudan are the most common, the reare three others: Reston virus (which is notinfectious to humans), Taï Forest virus and Bundibugyo virus. The Zaire strain, which hasup to 90% fatality rate, is the one currently ravaging Guinea, Liberia and Sierra Leone, where more than 6,000 people have died, as of  December 2014.

In November, there was another unrelated Ebola outbreak in the DRC, where a pregnant woman was infected after eating bush meat.

About 67 cases and 49 deaths were reported in the DRC as of November 2014. The deathtoll in the DRC from all prior outbreaks combined stands at more than 1,590

Initially, there was a perception that China was unprepared to cope with aserious public health threat such as SARS.The virus was being spread from person toperson, primarily from respiratory dropletsproduced when an infected person coughsor sneezes. As a result, schools, shops,restaurants and other public places were closed.

China’s handling of the SARS outbreakholds lessons for the Ebola epidemicin Africa. After some initial problemsin handling the disease, China’s healthministry later made fighting  SARS apriority.

Some hospitals were designate dexclusive centres for treating SARS patients. Other hospitals had isolatedareas for suspected patients. Once a casewas detected, quarantine and contacttracing were immediately instituted. Hospitals were directed not to turn awayany SARS patients. Top Chinese scientists,epidemiologists and clinicians were recruited to study and treat the diseaseand to design educational materials forthe general public.

The public had unrestricted access to SARS-related information, which helped reduce panic. SARS was categorized as areportable disease, meaning that all provinces were obligated to report new infections and deaths with “no delay, cover-upor missing cases.” Health officials released timely and accurate information during televised press conferences. The government, medical experts and the media joined forces to educate the public on the symptoms of SARS, its preventive method sand reporting channels. Eventually, the battle against SARS was won.