Rabat - Raja Casablanca fans chanted anti-Charlie Hebdo slogans in the wake of the publication of cartoons of the Prophet Mohammed. 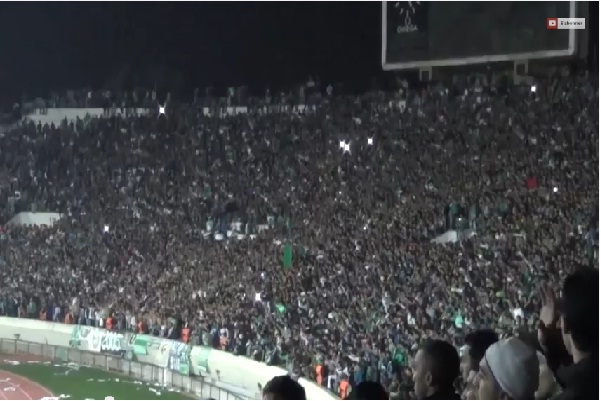 Rabat – Raja Casablanca fans chanted anti-Charlie Hebdo slogans in the wake of the publication of cartoons of the Prophet Mohammed.

Around 40,000 fans attended Raja Casablanca’s friendly game against Tunisian side of CS Sfaxien on Saturday. They expressed their discontent regarding the publication of cartoons of the Prophet Mohammed by the French satirical weekly magazine Charlie Hebdo.

The magazine put a drawing of the prophet in the cover of its “survivors” issue in what is described to be a defiant expression of free speech following a terrorist attack on the publication’s Paris offices that killed 12 people on Jan.7. However, many Rajaouis, and many Muslims around the world, viewed it as another attack on their religion.

As always, the Raja Casablanca fans electrified the stands of the Mohammed V stadium in the economic capital. The fans chanted “Chaab Yakool Ila rassoul”, showing their love to the Prophet Mohammed and other songs denouncing his depiction by the French weekly.