Rabat – Every winter, Chellah in Morocco’s capital city of Rabat attracts dozens of storks. The former Roman settlement is worth a visit – not only for tourists.

“Clack-clack-clack-clack-clack,” is heard from afar. And again, “Clack-clack-clack.” We have not yet reached the reddish-brown walls and imposing gates, but already know who’s in charge here: a stork is perched at the very top of a battlement. He proudly extends his feathers, stretches his long neck and clatters his beak. Here, at the edge of Rabat where the gentle hill of the city drops to the river, stretches Chellah. It was an ancient Roman settlement, later an Islamic necropolis that has long been taken over by nature and is now one of the favourite places of many storks. Once you have walked through the gates you can see all the way to the banks of the Bou Regreg. The river separates Rabat from the neighbouring city of Salé. Its hills, covered with colourful buildings, stretches on the horizon. Between them is dark green pastureland. A few sheep graze on a slope; their bleating can be heard all the way to Chellah. “Clack-clack-clack.” Again, the storks announce themselves. Their numbers cannot be guessed at first glance. They perch in the trees, spread out with their nests in the ancient necropolis, gaze down from the mosaic-covered minaret of the mosque. When it gets cold in Europe, the birds move to Chellah. Not singly or in pairs, but as a large group. “I haven’t seen this many storks in Germany for twenty years,” a German visitor marvels. A few tourists stroll through the ancient complex, but since Rabat is rarely mentioned in the guidebooks, Chellah is never crowded. Moroccans bring their families here at weekends; some bring along a picnic. Young couples walk through the overgrown ruins. The capital city seems very far away. Today a peaceful place, it was once a bustling town. The first traces of a settlement go back about 2,000 years. The Phoenicians were probably the first to build here. When the Romans took over the helm in around 40 BCE, it grew to become a larger city. Remains of pillars, streets and some walls testify to it still. Later, Sala Colonia, as the Roman settlement was called, was given up in favour of the pirate haven of Salé. When the Merinid dynasty conquered Morocco in the 13th century, Sultan Yakub established a cemetery here. Mausoleums and a mosque were added. Sultan Abu I-Hassan converted Chellah to a necropolis in the 14th century. Its ruins lend the place a mysterious air today. 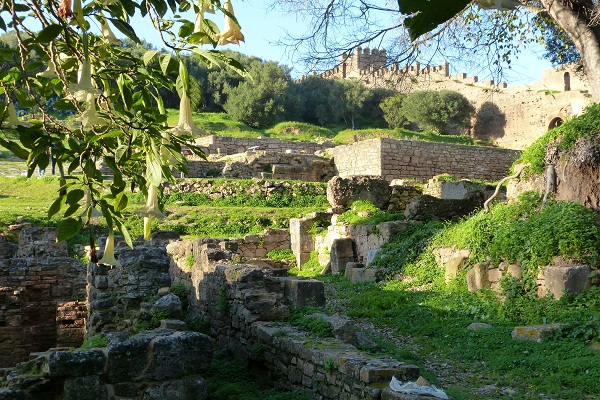 More has been preserved of the Islamic complex than from Roman times. The walls of the small mosque still stand and its minaret overlooks the entire site. Behind the mosque, steps lead to a sort of botanical garden. Bamboo, snakewood and orange trees grow here and a few benches invite visitors to linger. The walls surrounding Chellah are the same as the city walls of Rabat, but here we encounter no hustle and bustle, no traffic, but only peaceful silence. It gets noisy here only once a year, when musicians from Morocco and Europe perform at the Jazz au Chellah festival. For one week they attract hundreds of fans each evening to extraordinary concerts in a very special ambience. Now, in the winter, nothing hints at the spectacle. A stork glides through the air almost noiselessly, wings outstretched, red feet elegantly extended. With a few stalks in his beak, he effortlessly lands on his nest. The holiday has begun.