Salé - In his book, Modernity at Large, Arjun Appadurai argues that the flow of global cultures can be subsumed into five major landscapes: ethnoscapes, financescapes, technoscapes, ideoscapes, and mediascapes. 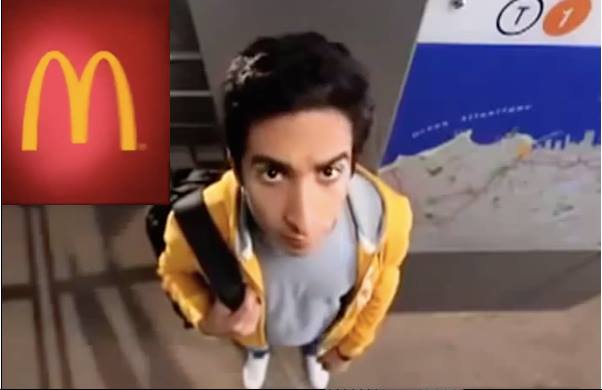 Salé – In his book, Modernity at Large, Arjun Appadurai argues that the flow of global cultures can be subsumed into five major landscapes: ethnoscapes, financescapes, technoscapes, ideoscapes, and mediascapes.

Advertising pertains and subscribes to the last “scapes.” It negotiates, mediates, and subverts the local and the global, the feminine and the masculine, the hegemonic and counterhegemonic discourses. Many cultural theorists emphasize global cultural flows as mere Americanization and Mcdonalization of the world lifestyle. Indeed, McDonalds are not only a sphere of marketing American products, but also a locus of cultural encounters and practices. The advertisement under analysis (See Video) vindicates and institutes new cultural conducts that tie tradition with modernity, reconciles and undermines the generation gap, and essentially brings to the fore new communicative practices.

The dialectic—and even sometimes polemical—approaches between modernity and tradition have been the focal interest of many cultural theorists. Modernism, postmodernism, post-colonialism, and post-traditionalism approaches endeavoured to weave out various readings of the bond between the two concepts. In Morocco for example, the issues of gender and space are interwoven into the power dynamics of tradition-modernity interplay. Salafists and fundamentalists seek refuge in cultural heritage and tradition, while modernists and secularists ascribe a prosperous future to Morocco in the unconditional adoption of Western (especially American) modernity. The advertisement is set in Rabat regarding the audibility of tramway honking sounds. It is obvious that the main actor in the advertisement repeatedly lies to the others. It is only when McDonalds and modernity associated with it are surfaced that the youth starts to tell the truth. This is probably to insinuate that traditions are replete with cultural and religious imperfections, and that traditions teach lies.

Retrospectively, the advertisement starts with a mother impulsively advising her little son to stick to a presumably cultural and traditional proverb: Saba9 Lmeem Tarta7 which literarily means “start with ‘M’ and live comfortably.” The mother fervently incites her little son to cling to Moroccan cultural heritage. In fact, the mother’s advice stands as proof that women and mothers ought to be the guardians of traditions and culture (Fig 1).

Women, according to the patriarchal mind-set, are obliged to comply to and transmit cultural values to different generations. The setting of the first shot of the advertisement is home in a conspicuous dominance of black and white color; this hints at the past and traditions that are primarily nourished and inculcated in the domestic sphere. If traditional gender roles prescribe the binary opposition of private and public spaces, and if the mother is contained in the domestic sphere of the home in the first part of the advertisement, McDonalds endows young people (especially young girls) with the freedom to encroach into the male-dominated cafés and restaurants. There, they are allowed to transgress the haremization pinned on them in phallocentric society and discourses. Furthermore, it can be elucidated that there is a paradoxical juxtaposition of the private space, the home, with the public one, the street.

Ten years later, to the astonishment of the viewer, the boy has grown up and recursively perpetuated his mother advice, which is conveyed through a voice over technique. He is alone in the street and disregards any attempt to communicate with his co-nationals. This avoidance of communication invitations implies an American individualization that starts to seep into the fabric of a supposedly collectivist Moroccan society. Surprisingly enough, the facial features and readiness to responsively communicate when asked about “a place to eat in for a reasonable price” are disclosed (Fig2). The instant answer that resides at the tip of the tongue of the youngster is “McDonalds” that is reminiscent of the “M” his mother recommended to him in his childhood. One can infer that children are brought up on the reverence of the American cultural values and lifestyles.

Indeed, we can safely argue that McDonalds around the world exemplify Marshal McLuhan’s “global village.” McDonalds are not only to be found in the elite bourgeois-based centres, but they also extend to the previous so-called peripheries (Salé city, as an example). This is to say that brands and advertisements tend and urge people to eat alike, think alike, and, importantly, be alike. This likeness hegomincally ought to be in an Americo-centric fashion. McDonalds procures and inspires youth to be happy so much that happiness and positiveness are to be solely sought in McDonalds. Contrary to public belief, McDonalds provides cheap, varied menus ranging from chicken burgers to cheeseburgers at very low prices.

The advertised product is significantly called “menu mabrouk”: two languages and cultures are fused in this appellation. The epithet “mabrouk” refers to a traditional cultural belief of Moroccan people which is dubbed “el baraka.” This restaurant not only affords cheap products in a modernized space that brings about happiness and joy, but it also bestows blessings on those who frequent it. In McDonalds, one can find “all that you love,” including girlfriends and boyfriends. The advertisement showcases two couples that are apparently satisfied and happy. One of them has headphones in a reference to a musical culture that globalization has been instituting (Fig 3).

A young waitress is apparently cheerful and happy to serve her peers. The choice of the youth is not a random one. The globalizing/Americanizing ideology targets the youth for two main purposes: their inexperience and immaturity, and their fragility to any cultural alienation—though this fragility is necessary to ensure a future dominance of American cultural values and conception. Semiotically speaking, two colors predominate the technicolor parts of the ad: red and yellow. The former signifies love and romance, while the second symbolizes jealousy and zeal. McDonalds is the ideal space to “enjoy sweet moments.”

Advertising, as a matter of fact, promotes marketability of products and, importantly, drives representation on cultures, identities and the creation of meaning.