Morocco World News
Home Highlights on Morocco Algeria, France, Egypt Scheming Against Morocco, Who is next? 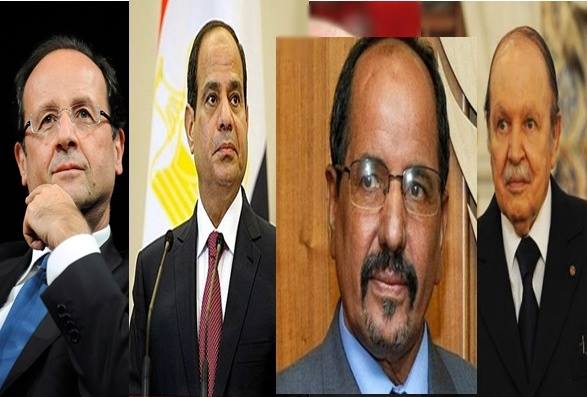 San Francisco- Until recently, the Algerian regime was riding on cloud nine, enjoying the fact that unforeseeable events had damaged the relationship between Morocco and its allies. It watched the deterioration of the once-excellent relationship between France and Morocco; two solid allies who, until Francois Hollande and Laurent Fabius took office, saw eye to eye on many areas.

Many in France saw the partnership with Morocco as “exceptional”.  In addition, the Algerians authorities were elated to see that Sisi’s Egypt decided that rapprochement with Algeria, rather than Morocco, would be much more rewarding.

Sisi’s wishful thinking is to form a North African axis between Algeria and Egypt; a move in line with Algeria’s ultimate goal to isolate Morocco. At the same time, it would help Egypt acquire gas at a preferential price for years to come and serve as thanks to the Algerians for their role in helping Egypt return to the African Union, after its suspension due the overthrow of the democratically-elected President Mohammad Morsi and the death and imprisonment of hundreds of Egyptians.

And if these two major events were not enough, the “Chris Coleman” leaks were simply icing on the cake for the Algerian regime. According to Moroccan Minister Salaheddine Mezouar, the leaks are apparently the work of Algeria secret service.

The hacker revealed that his goal is to weaken Morocco’s standing in the UN, along with its allies. Who else would want this to happen other than Algeria?

One thing Algeria has overlooked, if not underestimated, is the Moroccan monarch’s response to the schemes against his country. He first delivered a speech to the Moroccan people on the occasion of the 39th anniversary of the Green March, in which he let the world know that the Sahara is in Morocco and it will remain so until the end of time. He could not have been more clear and unequivocal that Morocco will not relinquish an inch of its Sahara.

To the French, he let them know that they cannot form their pseudo-alliances on Morocco’s back. It took a terrorist attack in Paris for Hollande to realize that he made a mistake taking sides. Now the French are rushing to repair this mistake, to Algeria’s chagrin. Morocco’s Justice Minister just met with his French counterpart, and Laurent Fabius, the French Foreign Minister, is apparently planning to visit Morocco soon. Also, King Mohammed VI just left for France for private visit, and will most likely meet with the French president to patch things up.

Regarding Egypt, Morocco did not have to do much. A few clips on Moroccan national television describing Sisi as the leader of a coup resulted in the Egyptian Foreign Minister offering an invitation to the Moroccan King to visit Egypt and meet with President, in addition to Egypt’s support for the Moroccan autonomy proposal. Algeria’s Foreign Minister could not believe these developments. He called his Egyptian counterpart the moment he returned to Egypt to see if the country has changed course.

Furthermore, the price of oil has plummeted, and Sisi perhaps realized that he does not need Algeria’s preferential price after all.

The Algerian regime will not be able to fulfill the promises it has made to its people. It has already cancelled many of the projects that were planned, and halted hiring in the public sector. This will certainly have dire consequences in the months to come. We should expect more attacks from Algeria on Morocco. It has always been the case when its internal problems are on the rise. President Bouteflika’s health is going from bad to worse, and no one knows what will happen when he is no longer in the picture. The Algerian regime needs to realize that the clock is ticking, and it cannot use Morocco to save itself from an eventual uprising of the Algerian people.