Rabat - The Arab Spring universal tide has successfully and dramatically engulfed the famous Great Wall of China that has aptly stopped all invaders in the past. 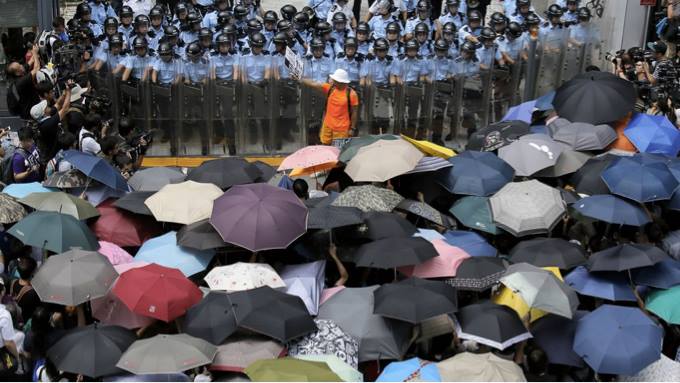 Rabat – The Arab Spring universal tide has successfully and dramatically engulfed the famous Great Wall of China that has aptly stopped all invaders in the past.

Today, the concept of uprising against dictatorship is undoubtedly reaching this land of the Far East, regardless of its economic development and human welfare. The Chinese want democracy and not bread alone.

This uprising, dubbed the ‘Umbrella Revolution’ and taking place in Hong Kong, is threatening the foundations of the mainland Chinese establishment. The Chinese have tried to subdue it, but they have failed miserably and do not have many options left. They are all hard choices that will ultimately incur the wrath of the West, something they would want to avoid at all cost. What then are the options left for China?

If China crushes the uprising that started on September 26, 2014, it will revive the unfortunate souvenir of the Tiananmen Square of June 3 and 4, 1989, which was condemned by the whole world. Great Britain, the previous responsible authority of Hong Kong territory, will accuse China of going back on its promise to give the territory a special political status of democratic representation.

Secondly, if China deals harshly with the protesters, this might lead to protests elsewhere, either among the Chinese eager to achieve democracy or the ethnic and religious minorities striving to get some sort of real autonomy, like the Muslims in the northwest provinces of Xinjiang, Gansu, and Ningxia, who are weary of the central authority.

China has achieved tremendous economic development in the last three decades. The GDP (estimated in 2013 at $16.149 trillion)1 has gone up and so has the per capita income ($11,686).2 As a result, Communist China is no more Communist in economic terms; it is, in a way, the El Dorado of capitalism. In addition, the population, especially in urban centres, has become accustomed to Western luxuries and comforts. China has one of the largest billionaire classes in the world. According to Forbes, China’s top 100 richest are now worth $376 billion, up 19 percent from a year ago.

So one wonders, what is Communist about today’s China ? The answer is its political system, which is grossly incompatible with its economic policies and general cultural environment.

This incompatibility might be tolerated by mainland China today in appearance, but underneath there is tremendous discontent simmering and waiting for the propitious moment to go off in a spectacular fashion. The ‘Umbrella Revolution’ unfolding in the Causeway Bay, Mong Kok, and Admiralty in Hong Kong will probably set fire to the Chinese powder keg any moment. That is why the Communist Party is currently dismantling all protest camps quietly and trying to avoid any form of clash with protesters.

The protesters will soon vacate the place, but will ultimately return much later more vociferous and combative than ever. Probably this time, the democracy virus will affect the rest of China and like in the Arab world, it will be unstoppable. All Arab dictators, whether Tunisia’s Ben Ali, Egypt’s Mubarak, Libya’s Qadhafi, Yemen’s Ali Saleh or Syria’s Assad believed they were strong and well protected by their police, army and their corrupt system, but they were wrong. Tunisia had the highest ratio of police per inhabitant in the world, but the uprising showed how wrong the dictator was and how vulnerable and weak his regime was in the face of popular rage. The power of Arab dictators was a mere chimera or rather a mirage in the Arab desert.

What’s wrong with China ? So far, it has showed a tremendous capacity of realpolitik in the last two decades, making it the second world power after the US. China has been nimble and crafty in adapting to capitalism and market economy. After all, the Chinese have always been good merchants throughout history, but not good in democracy. The problem is that the Chinese want the benefits of market economy in quantity i.e. commercial gain, but not in quality i.e. representational democracy.

To the question, will China allow democracy in Hong Kong ; The Guardian argues that it will not:

“Top Communist party officials have put their full weight behind the proposal for committee-vetted candidates, and have shown no sign that they’ll be willing to heed protesters’ demands. Above all, Beijing fears that the city, if left to its own devices, would choose a pro-democratic candidate, potentially planting the seeds for a movement to break away from mainland control. And for a leadership already grappling with separatist movements in the western regions of Tibet and Xinjiang, any sort of successful independence movement would set an unthinkable precedent.”

At the turn of the last century on July 1, 1997, Great Britain returned Hong Kong to China, its lawful owner. By then, Hong Kong had been developed by the British into a major international financial centre in Asia and the world. China was euphoric about this territorial retrocession, as it was getting a fully-developed financial platform to boost its economy and give its political drive international legitimacy. Nevertheless, what China did not realise then was that the gift of Great Britain was teeming with democratic sentiment, liberal education and Western way of life. It gladly accepted, at the time, to give the territory a special democratic status. That was, undoubtedly, a major mistake for its Communist stability.

Almost two decades later, China is going back on its promise and is trying to phagocytise the territory to protect itself from any danger of democracy. The ‘Umbrella Revolution’ might be stifled for a while, but it will return stronger than ever to achieve its goals of keeping the territory democratic.

If China loses this face-off with Hong Kong, it would mean the end of an era and the beginning of a new dawn for the whole country because the Communist regime today is anachronistic with its economic development. The present leaders have to realise that it is high time they exited the political scene and allowed new democratic leadership to continue the long march of this country towards world leadership. No undemocratic country has ever led the world and will not in the future. If the US today does, it is because the whole world looks up to it and holds its model in high esteem.

The high level of mistrust between Hong Kong and mainland China has created a political and cultural rift between the two. According to British magazine, The Spectator:

“The Hong Kong University’s regular identity survey shows a growing number of residents (40%) who identify themselves primarily as ‘Hong Kongers’, not ‘Hong Kongers in China’ (27%), ‘Chinese in Hong Kong’ (11%) or ‘Chinese citizens’ (20%). That’s a massive rise from the low in the Olympic year of 2008, when 34 percent of respondents identified as ‘Chinese citizens’ and just 22 percent as Hong Kongers. It’s not just a sense of betrayal over 2017 — a chasm has for years been opening up between the mainland and the islands. The influx of mainlanders has caused some Hong Kongers to describe them as ‘locusts’ swarming over their city, though that language has not been visible in these protests. Previous protests saw off attempts at Beijing-backed ‘anti-subversion laws’ in 2003 and propagandistic ‘patriotic education’ in schools in 2012.”

China’s leaders should sit back and reflect on the peaceful uprising. The ‘Umbrella Revolution’ is a timely alarm to remind them to overhaul the Chinese political system before it becomes too late. China’s military might not be able to protect the leadership from the wrath of the people and their legitimate desire to achieve freedom and democracy in the near future.

In the Arab world, it was always believed that only two things could threaten the existence of the dictatorial regimes – a military coup or the death of the za’im (leader). Therefore, the dictators by means of corruption and co-optation and privileges kept potential dissenters happy and watched every one of their moves through political police called mukhabarat. No Arab dictator ever believed that the danger would come from the youth. No Arab citizen ever imagined that a Tunisian street fruit vendor by the name of Mohammed Bouazizi, by setting himself afire, would ignite a series of Arab uprisings that continue to change the entire political map of the Middle East.

The ‘Umbrella Revolution’ is no different from the Arab Spring. The Admiralty Square democracy fighters have been forced to leave their squats. However, that is not, in any way, a defeat but a moment of deep reflection for the future of the fight. The Chinese Communist Party must reflect on the future of China before it is too late; they ought to learn from the Arab experience.